The Greatest Road Trip continues the western portion of our journey with a trip to and through Nevada. Truly one of the unique states in America, Nevada combines startling wilderness and glitzy nightlife. It combines desert darkness with lights that can be seen from space. It is home to most of the world’s Elvis impersonators and a good portion of the world’s prairie dogs. What could be better than that?

What makes Nevada unique in terms of culture and mindset? Wanna bet you can guess? Wanna bet on anything at all? 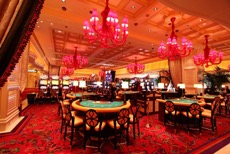 Gaming is a multi-billion dollar industry in the state of Nevada. Say what you will about gambling as an occasional diversion, a hobby, an addiction, or the reason families split up. Gambling and the taxes it generates helps Nevada schools to be some of the very best, and best funded (funny how those two things go together) schools in the country. However,  the gambling world is changing in the age of the internet. How these changes are affecting Nevada is something we will discuss today.

As with so many states, Nevada’s Statehood was timed for political expediency. It was rushed to the finish line eight days before the election of 1864. What was the hurry? Abraham Lincoln needed the electoral votes to win a second term and the successful prosecution of the Civil War.

Boy, those who say the West is wide open spaces know of that which they speak. Nevada, a rural state if there ever was one, is the seventh largest state and the 15th smallest by resident totals. It is bordered by Oregon to the northwest and Idaho to the northeast. California is to the west, Arizona is southeast of Nevada and Utah is to the east.

The highest point in Nevada is on the Nevada/California border, in the high Sierras atop 13,147 foot Boundary Peak. The lowest point is also at the California border along the Colorado River, 437 feet above sea level. The geographic center of Nevada is found 11 miles northeast of Kingston. 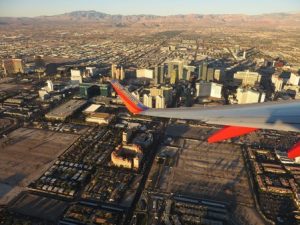 Boulder City Municipal greets over 100,000 flyers a year. Peach Springs, Arizona is the top destination as part of the tourist flight industry to the Grand Canyon.

Over 1.5 million flyers each year use Reno–Tahoe International. Las Vegas is the top destination. 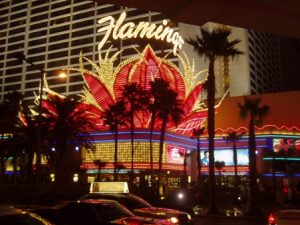 Weird and Wonderful Facts About Nevada:

Bugsy Siegel named his Las Vegas casino “The Flamingo” for the long legs of his showgirl sweetheart, Virginia Hill.

In 1931 the Pair-O-Dice Club was the first casino to open on Highway 91 in what was to become the Las Vegas Strip. 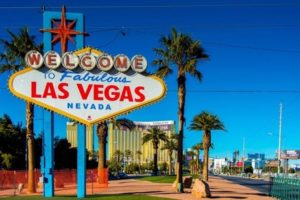 Jack Dempsey was a hotel bartender in Tonopah before becoming a boxer.

Area 51 is near the town of Rachel. “Ssshhhh…” No one is supposed to know about it.

There is enough concrete in Hoover Dam to pave a two-lane highway from New York City to San Francisco.

Nevada is the only state with a museum devoted to the life and times of Liberace.

Let’s Take a Trip Through Nevada:

Our trip through Nevada is only going to take about three days and cover only 493 miles, but we will see more diversity of scenery and activity than in any other state. First, though…

…let’s talk about where we aren’t going. Lake Tahoe is one of God’s loveliest creations, and we considered claiming it for Nevada. We decided to give it to California, partially because the best lodging values are on the California side. So, even though California has such grandeur it will take three articles to cover it, Lake Tahoe goes to the Golden State.

Not to worry, because there is enough to see and do in Nevada to fill up our time! We’re going to start in Reno. 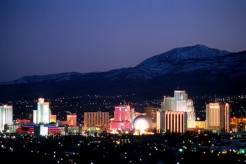 Do you have a pocketful of quarters you can afford to lose? Great, because maybe you’ll get rich!!!

Probably not, but it will be fun giving it a go. We’re going to hit the Silver Legacy Hotel/Casino midtown to relieve you of your quarters (Errr, try to hit the jackpot!).

At the Silver Legacy, the change in Reno over the last 20 years is apparent immediately. As recently as 1999, the Silver Legacy, and its sister hotel the El Dorado was crowded with guests. Now, the place is half empty and our well appointed room is available for $60 a night. Internet gambling, technically illegal but more prevalent than liquor during Prohibition, has sucked the economic vitality out of Reno’s gaming downtown.

That makes Reno, a charming destination apart from any kind of wagering concern, a great lodging value. Plan ahead, and you might get a nice room for half of the 60 bucks we paid. Honest, you can.

Are you stinking rich after your trip to the casino? Ah, that’s too bad, but let’s go to the car museum. 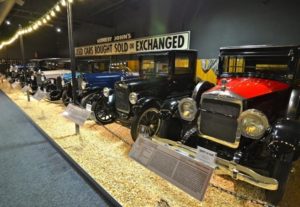 Reno’s National Automobile Museum was selected by AutoWeek Magazine as one of America’s five greatest automobile museums, and it is spectacular. How much fun is it to see vehicles owned by Frank Sinatra, JFK, James Dean, and Elvis? The car from the movie Titanic (where Leo DiCaprio fully enjoyed his time with Kate Winslet) is here, as well.

After a restful night’s sleep, we head down Virginia City way. (That’s how the cowboys say it.) The Comstock Lode, America’s greatest silver strike, was discovered near here. Virginia City has been maintained in Old West style.

We are going to wet our whistle at the Delta Saloon. The Delta Saloon and Casino is home to the “suicide table.” That’s where Black Jake reportedly lost $70,000 in one night before turning a gun on himself.

Then it’s time for a train ride. We will catch the train at the F St. Depot for the half hour ride to Gold Hill. On the way, we will go through the one remaining mining tunnel and hear stories from the age when Virginia City was one of the most important places out west.

Long drive coming up. A little over 400 miles will find us in Las Vegas. Can’t wait? Me either. We will get to Vegas at night, though you wouldn’t know it from the lights of the Strip. We will check into our hotel and get a good night’s sleep…if the casino doesn’t beckon too hard.

Hotel rates are low in Vegas. That isn’t how they capture your money. We’re staying at the MGM Grand for $57 a night.

Our day in Las Vegas needs to start early. I hope you brought good walking shoes. The streets of Vegas are some of the best people-watching streets in the world. Keep your eyes open and you won’t be able to help seeing someone famous.

We’re going to ride the Wheel which is situated at the end of the Linq Promenade on the Las Vegas Strip. It’s called the High Roller and it whisks lucky riders in air-conditioned cabins 550 feet above the busy Las Vegas Strip below. The High Roller offers a view that you won’t find anywhere else in town.

Tonight, we’re going to see a show. You pick which one. There are, literally, hundreds of great acts from which to choose. Mariah Carey? Celine Dion? Britney Spears? She would be a solid choice, but they all have residency shows in town.

Who? Wayne Newton? You really are old school aren’t you, Liebschen? Of course, we can see Wayne. No Danke Schoen necessary.

Whoever we see it will be one of the memorable nights of our entire trip across the country. It’s Vegas, baby! 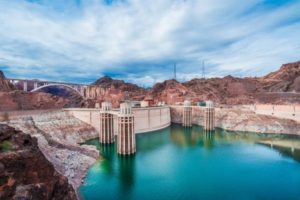 View of the Hoover Dam in Nevada

We will complete our trip across Nevada at Hoover Dam. An air-conditioned van will pick us up at the MGM Grand. We will take a tour of the dam and of the powerhouse. Hoover Dam may be the most ambitious public works undertaking ever completed, and it is all there for us to see.

Nevada has much to offer the tourist. It has just as much to offer someone who wants to settle within its borders. If you like desert climes, small town friendliness, and/or Wayne Newton, you couldn’t ask for a better choice. We hope you enjoyed the trip.