To understand how different “Hair” was let’s look at the other shows that were playing on Broadway at that time:

James Barbour was singing “Bring Me Giants” as Cyrano de Bergerac. Linda Eder responded with “Love is Here At Last” as Cyrano’s Roxanne.

Richard Branagh and John Gielgud performed “He that has and a little tiny wit” in King Lear.

Richard Castellano was warbling “Love, look at the two of us, strangers in many ways.” in the musical “Lovers and Other Strangers.”

In other words, “groundbreaking” wouldn’t have been the word to describe the 1968 Broadway season. Then, came “Hair.” 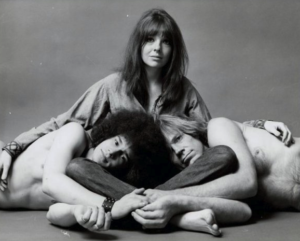 Diane Keaton, and cast-mates in a publicity photo for “Hair.”

What was the plot? Well, not much, really. There was kinda/sorta a storyline about a guy who was afraid he was going to get drafted to Vietnam. But, his story disappeared for a while so Diane Keaton could sing about how much she enjoyed sex with black men.

The songs had unrecognizable tunes, but that was okay because the lyrics didn’t make much sense either. The third song was called “Hashish.” It was sung by the entire tribe (that was what this show called a group of friends) and it was nothing more than a list of the names of drugs, sung in a near monotone.

Right after the drug number came “Sodomy.” That was a song about homosexuality when the very word was considered taboo in polite society.

These were just a couple of the aspects of “Hair” that made it a different kind of show. They were overshadowed, though, by the nudity. The sight of naked people would cause some people to walk out of the theater. Two Apollo astronauts left Opening Night early.

In retrospect, the hullaballoo about naked people on stage was overblown. At the end of the first act, and behind a gauzy curtain, some people took their clothes off. Superimposed over their bodies was an overlay of flowers and light. The whole scene lasted 20 seconds, and the nudity was optional for the performers. In the London iteration of the show, almost none of the performers disrobed.

For all of the cultural (and tune) dissonance in “Hair”, it did have songs that have stood the test of time. The tribe as a whole sang  “Aquarius.”Claude, Sheila, Dionne, and Tribe sang ” The Flesh Failures, known more popularly as  “Let the Sunshine In.”

For all of the fear and angst that “Hair” exuded, though, one song, sung halfway through the second act, embodied something special in the show, and in the emerging generation. Lynn Kellogg’s Sheila sang “Good Morning Starshine.” It was about hope in the face of war. It was about ultimate optimism. Finally and at last, it was about the bubbling assurance inside the breast of 1968 youth that tomorrow would be a better day because they would make it so.

A slice of time never recreated? Your favorite of the best online art magazines says, “Maybe not.”

What this nation saw from the March for Our Lives and the reaction afterward makes the message of “Hair” ring clearly once again. It was the youth of the 60s (along with Walter Cronkite) that brought an end to the Vietnam war. If necessary changes happen in this country today it will be because the youth of America broke through the logjam of “Same Old” to a new tomorrow.

Happy Birthday, “Hair.” Let the sunshine in, because this can be the new dawning of a new Age of Aquarius.