Conduct a little test next time you’re commuting. Look at the motorcyclists around you and take note of their age. You’re going to see snow in the stubble and silver in the hair. We have been told for the last ten years that Millennials are not into motorcycling. 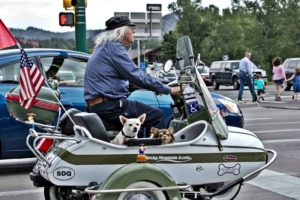 Harley/Polaris love this guy, but they must get younger too.

Until now, it has been largely anecdotal evidence, but no longer. According to reports this week from The Motley Fool, bike sales are in deep decline, because motorcycling is becoming a pastime of the AARP set. Harley-Davidson and Polaris (owner of the “Indian” brand) have noticed the alarming trend and are taking steps to help matters. Their success will largely tell the tale of the next 20 years in the bike industry. Can Harley/Polaris raise two-wheeling from the dead? That’s what Gildshire Magazines wants to find out.

For Harley’s part, they are talking big. H-D is committed to adding 2,000,000 new Harley riders and launching about 100 new models over the next decade, all while growing its international business by half. How are they going to accomplish that in a down market? They intend to grow riders as fast as they build bikes. That’s already evident in the Harley-Davidson Riding Academy programs Harley is unveiling. That’s where it trained some 32,000 new riders.

For fun, as well as to show they could do it, Harley set out to train one entire town in North Dakota to ride a bike. A little over 15% of the population went on to buy a Harley-Davidson motorcycle. (For now, we’ll ignore the fact that there are only 92 residents in the town. Why spoil a good story?)

Some folks want to dip a toe in the water before jumping into the deep end. Harley knows that, and is growing a bike rental program in partnership with EagleRider. For their part, Polaris is also considering experimenting in the rental realm, believing its three-wheeled Slingshot would integrate well into the ride-share economy. Polaris hasn’t seen as steep of a decline with Indian as Harley has seen with their bikes. That said, Indian has gone bankrupt multiple times, ergo Polaris can’t be too careful.

Whether these measures are the answer for Harley/Polaris only time can tell. The two competitors know one thing, though. They need to see young riders “goin’ up the country,” or the future will look a little drab.

Tiny Houses: Three Pros, Two Cons, And Is One For You?