Harvey Weinstein, the one-time mogul, self-styled star-maker, and apparent serial groper was convicted this week. The charges: third-degree rape, and sexual assault. While he was found not guilty of more severe charges, this is just the first of several trials Weinstein will face in the months, and even years, to come. The 67-year old Weinstein faced the jury stone-faced as the verdict was announced after five days of deliberation. Gildshire’s photo/chronicler Lev Radin was on the scene for the Harvey Weinstein verdict and the mood surrounding it.

One of the faces of the #metoo movement that swept the country and brought focus on sexual improprieties by powerful men, Weinstein used his position of influence to gain sexual favors. Production assistant Mimi Haleyi and aspiring actress Jessica Mann related on the witness stand how Weinstein had used forcible measures to have his way with them. Their testimony convinced the seven-man, five-woman jury of Weinstein’s culpability. Next month, in the sentencing phase of the trial, he will learn how much time he will serve for the crimes determined in this trial. He faces 5-25 years for first-degree criminal sex act for his forcible oral sex assault on Haleyi. Weinstein faces up to four years for third-degree rape count as a result of the Mann encounter. The judge can consider running the sentences consecutively, for a maximum of 29 years, or concurrently. Sentencing commences March 11. 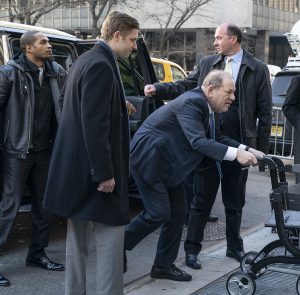 But, this is more than an isolated case against one man

While the Harvey Weinstein case isn’t the whole of the #metoo movement, it is certainly part of it. The movement grew from a virtual avalanche of sexual harassment and assault charges leveled against powerful men from all walks of life. #metoo prompted conversations about gender and misconduct in all walks of life. But the publicity focused on allegations of assaults by power brokers in the entertainment industry. The movement grew wings and flew worldwide when, three years ago, the New York Times and the New Yorker published the lurid allegations against Weinstein.

Hopefully, closure for the victims. The courage they showed in coming forward was excruciating for those who watched empathetically. Beyond closure for them, perhaps a sea change in the way we treat each other. It won’t be sudden, and it may take longer than this generation lives to get it right. But, it can start with what took place this week at the New York City courthouse. It is said that the wheels of time turn exceedingly slow, but that they turn on the side of right. Gildshire hopes for that outcome, and that it started with the Harvey Weinstein verdict in a court of law.

How to Have More Friends? Ingredients for Long-Term Friendship