Good art always holds meaning, whether it’s obvious to every viewer or not. Lots of artists like to have a special relationship with what they create, leaving symbols or messages behind. After studying a piece, others often discover these secrets. Here are some famous examples:

Michelangelo spent years working on the gorgeous Sistine Chapel, and he hated every second of it. That didn’t stop him from including some interesting choices. In the famous piece The Creation of Man, God and Adam reach for one another. If you look at God closely, you’ll notice he is surrounded by angels and wears a red cloak. The shape closely resembles the human brain. Michelangelo had experience dissecting bodies, so there’s no doubt he added this detail intentionally. 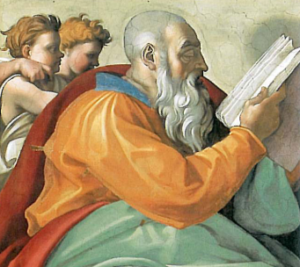 During the four years of work on the Sistine Chapel, Michelangelo frequently butted heads his patron, Pope Julius II. Right above the door the pope used to enter the chapel, Michelangelo painted the prophet Zechariah with two angels. The prophet looks like Pope Julius, and one of the angels is making an obscene gesture with his fingers known as “the fig.” It’s Michelangelo’s not-so-subtle way of saying “screw you” to the Pope. 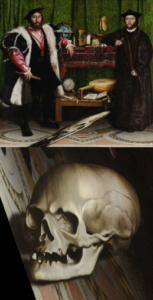 In his painting “The Ambassadors,” Hans Holbein the Younger painted a strange gray-white smear at the bottom. It looks like a mistake, but if you look at it from the right angle, it’s actually a human skull. The artist’s inclusion of this optical illusion could be to remind viewers that death is also present, though not clearly-seen.

A garden of symbols

Sandro Botticelli is one of the Renaissance’s most famous artist, and his painting “Primavera” one of that era’s most precious works. It’s packed with over 500 plant species, and eagle-eyed conspiracy theorists believe it may even hold clues to a plot against the Medici family – the iconic Renaissance art patrons – and religious doctrine. 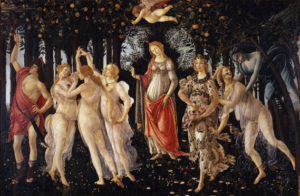 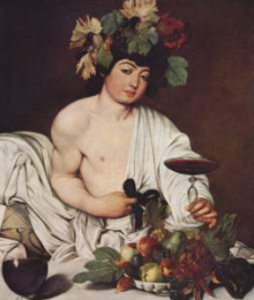 lot of artists like to include hidden self-portraits in their work, and one in particular went very far to be subtle. Caravaggio’s Bacchus depicts a  young God of wine with a carafe to the viewer’s left. It wasn’t until 1922 when a restorer noticed a tiny portrait of the artist in a reflection of light on the wine’s surface. Years of grime and poor restoration caused the image to disappear, but the modern technology of reflectography allowed experts to see the portrait again. 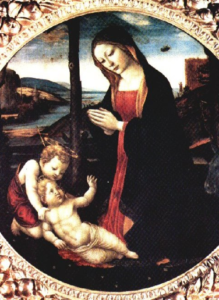 Madonna and Child…and a UFO?

The 1490 painting The Madonna with Saint Giovannino depicts a relatively-banal scene of the Virgin Mary, baby Jesus, and another holy child, but if you look in the background to the right of Mary’s head, you can see a weird floating object with a tiny figure looking at it from the shore. Did the artist Domenico Ghirlandaio simply paint a strange rendition of an angel, or is he evoking a UFO sighting?

“The Last Supper” played a key role in Dan Brown’s book The Da Vinci Code, but the real code is just as interesting. A computer technician looked at the how the bread rolls on the table are spread out, and realized that if he drew a musical staff, the rolls and the Apostle’s hands actually correspond to musical notes. Da Vinci wrote from right to left, so when the technician (Giovanni Maria Pala) transcribed them, a 40-second long requiem revealed itself.  Da Vinci was a musician, so he almost certainly intentionally-placed in this music. 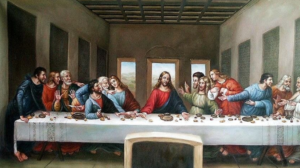 The vampire on the chapel

In 2003, a German artist crafted a bust of Bela Lugosi, the famous actor known for playing Count Dracula. The artist Harmut Zech traveled with the bust to Budapest, and saw an empty ledge on 1896 Vajdahunyad Castle. At night, Zech and his friends installed the Bela Lugosi bust. It’s still there. 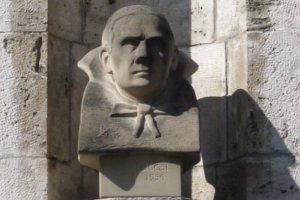 Famous artists are used to controversy, but when should art be censored? Check out this article on the political and societal repercussions of art criticism and censorship.