High On Power: The CIA and MKUltra

Home » Our World » High On Power: The CIA and MKUltra

In the classic film Jacob’s Ladder, the main character experiences terrifying visions which he learns might be related to experiments performed by the government. It’s the perfect plotline for a sci-fi movie, but the truth is, it really did happen. In 1953, the CIA began experimenting with drugs and mind control, believing that the Soviet Union was doing the same. They called the tests MKUltra. The result? Infringement and abuse of thousands of Americans.

The CIA knew no one would be too keen to learn what they were up to, so the MKUltra project was a secret. Using drugs like LSD and acid, the CIA began testing to see if they could control people’s minds with more ease with hypnosis or render them stronger against torture. The method was simple: drug someone without them knowing, and then follow them around and watch the show. 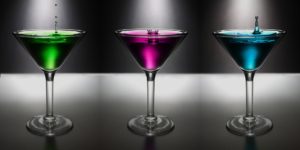 In 1957, Deputy Marshall Ritchie sipped a bourbon with soda when he suddenly began feeling strange. He noticed the lights on the Christmas tree spinning, and his body temperature rose alarmingly. Eventually, he became extremely paranoid, and drew his gun on a bartender. After being subdued and arrested, he was given probation and a fine. The punishment might have been more severe, but as an officer with no priors, the judge scaled it down. However, Ritchie did have to resign. Years later, he discovered he had been drugged.

The CIA wasn’t above using the most vulnerable in society to meet their goals. They paid hospitals and prisons to drug terminally-ill patients and drug-addicted prisoners. Twelve hospitals participated, and at the National Institute of Mental Health Addiction Research Center, the CIA promised prisoners the drug of their choice if they participated in a hallucinogenic experiment.

Even those involved with the project weren’t safe. In one experiment, a group of scientists enjoyed a drink, only to be told by CIA operatives that they’d just been given drugs. Most of them made it out all right without lasting effects, but one displayed long-term problems. He became paranoid, so the CIA arranged for him to get treatment. The morning of, however, he crashed through a 10th-floor window and fell to his death. Officials ruled it an accident.

MKUltra consisted of 162 projects. One of the most famous – Midnight Climax – involved prostitutes. The CIA paid sex workers, who lured clients into a room with a two-way mirror. After the unaware clients drank drugged cocktails, operatives observed their behavior. 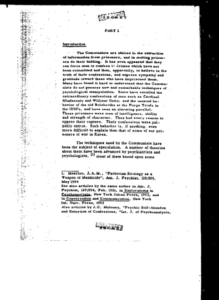 A declassified page from MKUltra

MKUltra continued through the 1960’s, though the CIA began to scale down the operation. 185 researchers and 80 institutions participated. Their identities remain unreleased. After exposure by journalists and victims, the CIA ended MKULtra in 1973, and destroyed most of its records. Four years later, a Freedom of Information Act request revealed 20,000 surviving documents, prompting more Senate hearings. Only two lawsuits went to the Supreme Court, and in both cases, the victims lost.

There’s still a lot we don’t know about MKUltra and its full effects. It features in TV, movie, and books like the Jason Bourne series and “Stranger Things.” The breakout character, Eleven, is the child of a MKUltra test subject.