In 1959, Igor Dyatlov took nine hikers, one whom he was romantically-interested in, on a trip into the Ural Mountains. They intended to reach Mt. Otorten, but they never made it.

They were supposed to end their trip on February 12, but after a few days passed and they didn’t show, relatives started worrying. On February 20th, a search team went out, and on February 26th, they found their camp. The hikers had abandoned it, leaving behind all their supplies. From the diaries left behind, searchers learned that after veering a bit off-course, the hikers had made camp to wait out a storm. That was the last entry. 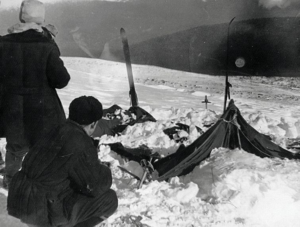 The first five bodies turned up a mile away from their camp. They were without shoes and coats, even though the temperature hit below 30-degrees. The legal inquest determined they had died from hypothermia. Three months later, police found the others. They showed odd injuries like major chest fractures and skulls, which experts said resembled injuries received during a car crash.  Zina, The girl Igor had a crush on, lacked her tongue and eyes. Bewildered, their deaths were credited to an “unknown compelling force.”

People have puzzled over this case for decades, and disturbing details emerged. The last campsite had a tent, and it had been damaged. However, the tent had been cut open from the inside, and all the supplies were in it. What had compelled the hikers to leave the safety of their tent, and turn up a mile away? One of the hikers had taken one item with him: his camera. 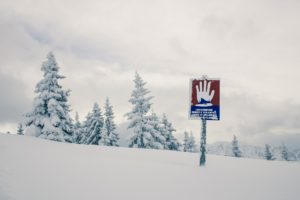 Did an avalanche cause the hikers’ deaths?

Theories swirl around what’s become known as “the Dyatlov Incident.” People speculate that an avalanche caused the hikers to panic, and flee their tent. Their internal injuries, which could not have been caused by other people, might have occurred from the weight of snow. The last four hikers were actually found beneath 4 meters of snow.

That’s a boring explanation, and people bring up the scrap metal found recently in the area. The Russians might have been conducting secret military tests, and given the strange presence of low alpha radiation on the hikers’ clothes, they could have died during a nuclear test gone wrong. There’s no evidence, however, and the government has denied any tests.

The three weirdest theories, however, involve balls of fire, the Yeti, and of course, aliens. Around the time the hikers went missing, people reported seeing strange fireballs in the sky. While they most likely were rocket or missile tests, some believe these mystery objects emitted a beam of violent energy that killed the hikers. In a special on the Discovery Channel, the host speculated that the hikers ran afoul of the Yeti. He pointed to Zina’s missing eyes and tongue, saying a creature obviously ripped them out.

Not to be outdone, the alien theory also relies on the sightings of fireballs. Believers say that these are evidence of alien activity, and pointed out that while saying their goodbyes at the funeral, relatives noticed an orange hue on the hikers’ skin, while their hair had turned gray hair. Whatever these balls of fire are, the lead investigator has said he believes the spheres have a “direct connection” to the deaths. 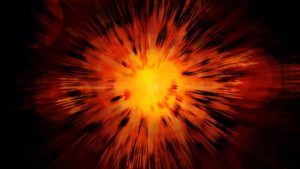 Does the answer to the mystery lie with balls of fire?

Theories about aliens might seem like a realm for the paranoid, but the government has spent a lot of time and energy researching the possibility. Read about the infamous “Blue Book.”

Contactless Payments are the Way of the Future