The coffee industry pulls in about $19 billion each year, making it a titan in the food and drink world. People love the taste, but sometimes, they don’t love the jittery effect the caffeine produces. They want to enjoy a new hot cup after dinner, but they want to be able to go to sleep, too. Luckily, there is decaf coffee! How does that work? In 1820, the caffeine was isolated from coffee beans for the first time by Friedlieb Ferdinand Runge. However, he didn’t study the chemistry very much, and left it at that. 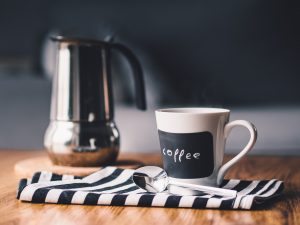 The first method for decaf coffee was discovered by accident

The first commercially-available decaf coffee came from a German merchant in 1906. Ludwig Roselius believed his father had died from too much caffeine, and searched for a way to remove the “poison” from coffee beans. He discovered a method by accident after a shipment of coffee beans become soaked in seawater. The result? Less caffeine, but the same taste, just a teeny bit saltier. He patented a method that involved steaming coffee with acids or bases, and then removing the caffeine with benzene. This became the standard go-to for decaf coffee for years.

If you know your history, you’ll recognize the early 1900’s as a pretty important time in German history. After patenting his method in 1905, Roselius began a coffee company called Kaffee HAG. He marketed his decaf coffee as a luxury, and in the 1920’s and 1930’s, when the Weimar Republic was strong, Roselius took advantage of the new health and fitness crave. He claimed decaf coffee could protect the heart and nerves. A healthy Aryan populace was key to Weimar Republic and later the Third Reich. Decaf coffee was part of the propaganda. It was no doubt served at all the important government meetings, while the kid-friendly chocolate drink Kaba once served 42,000 members of Hitler Youth at the 1936 Nuremberg rally. 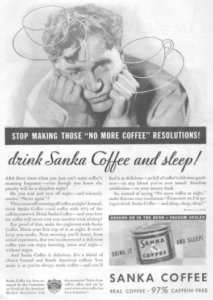 Decaf coffee in general didn’t hold a negative place in people’s minds, despite its association with Nazi Germany. In France, Kaffee Hag became Sanka, and General Foods bought the instant decaf-coffee brand in 1932. After the war, sales soared. Today, decaf coffee makes up 12% of total coffee consumption. Benzene is no longer used, because it’s a carcinogen.

Other methods for decaffeinating coffee include steaming the beans and then rinsing them with solvents. The third method – the Swiss Water process – uses a charcoal filter and carbohydrate solvent, so the caffeine is absorbed. Green coffee beans are soaked in water, and then natural components are added for flavor. The charcoal filter gets rid of the caffeine, and the method gets repeated until 99.9% of the caffeine is gone. The last way also steams the beans, but then rinses the caffeine away with sparkling water.

No decaf coffee is truly 100% decaffeinated. To be labeled as such, it must be at or below .1%.  Depending on the brand, there could be a 5-gram difference in terms of how much caffeine you’re getting. The Swiss Water method is considered the best for removing caffeine. The flavor has also dramatically improved. Decaf coffee has a reputation for being bad, but much of that stigma is based on coffee from the 1970’s.

Food scientists are trying to grow a naturally caffeine-free coffee bean, but it’s been a hard journey. Known as “Decaffito” and trademarked in Brazil, it’s all based on coffea charrieriana, a type of bean that lacks caffeine. Scientists believe they could bred the gene into other coffee plants, and research continues.