Home » Our World » Honda Civic is the Most Stolen Vehicle in the U.S.

If you haven’t had the pleasure, allow me to assure you that it is not a fun one. You spent an evening with your best girl, watching movies and eating popcorn. One, two, three kisses at the door and you’re headed home. Except you aren’t, because your car is gone. It was stolen from a parking lot that you thought was safe, if not secure. Gone is the memory of the pleasant evening on the couch. Out of your mind’s eye the taste of the popcorn and the kisses. Why would someone want to steal your car out of all the choices available? Perhaps, the car you drive has something to do with it. The Honda Civic is the most stolen vehicle in America. Gildshire wanted to learn more, and 24/7 Wall St. helped with the research.

Yes, I’ll wait if you want to stop reading for a moment and see if your Honda Civic is where you left it. Because, a new study, based on data from the National Insurance Crime Bureau, and the Federal Bureau of Investigation says the most Civic is the favorite target, and the favorite of the favorite is the 1998 model, pictured above. (I hope you kept comprehensive coverage on that car when you dropped full coverage.)

“Why Honda Civics, and why ones that old?”

The report suggests the Honda Civic is so often a target because the model is famed for its longevity. Also, older models (i.e the 1998 Civic) are unlikely to have been retrofitted with today’s anti-theft technology. It would be an aftermarket expense that most car owners never consider.

“Is car thievery a bigger problem than we think?” 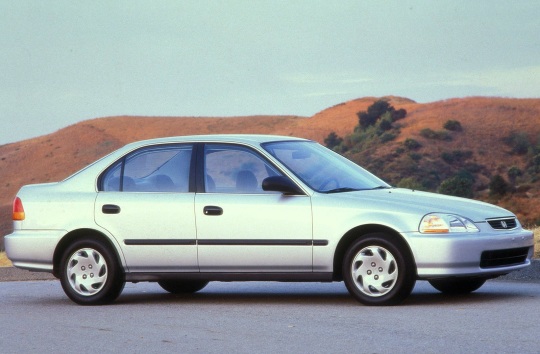 The ’98 Honda Civic is the favorite target for thieves.

In short, yes. The most recent numbers we have are from 2017, but they paint a grim picture. Almost 800,000 cars and trucks were reported stolen across the country that year. Just over, 45,000 of them were Honda Civics. Worse yet for car buyers who prowl the Honda new car dealerships, that particular make was second on the car thief hit list.

Right the first time! Other favorite targets include F-150 and F-250 pickups, Toyota Camry, full-sized Chevy, GMC, and Dodge pickups, Nissan Altima, and Toyota Corolla. Oddly enough, one of the models that sell the least among domestic makes is also one of the most frequently taken. That would be the Chevrolet Impala.

“Should I consider moving to somewhere less populated?”

Not necessarily, because Alaska recorded the highest number of stolen vehicles in 2017. It seems that cars with Anchorage licenses are the most attractive to criminals. More than $56.3 million worth of cars and trucks were heisted up there.

“Alaska had more cars stolen than California? That seems strange.”

Actually, California does lead in one category. That would be in the average value of car stolen. Californians lost their rides to the tune of an astonishing $2.7 billion in valuation.

Indeed, it would be, but it is safe to say that $2.7 billion did not include many 1998 Civics. Car thieves looking for that one big score will head for the Los Angeles area and its many shiny baubles in the parking lots of the Southland.

Car thieves are more active in some states than others, and some cities have very high rates of theft. However, interestingly enough Redding, California, tucked away near the Oregon border, has the most car thefts per capita in the state.

“I guess I should be careful.”

Indeed you should. The Honda Civic is the Number One target, but any car is vulnerable to an unscrupulous operator.