The Milan Motorcycle Shows (commonly called the EICMA) are a great place to go to see new bikes. Gildshire Magazines tracked down some of the newsmakers to see what is hot and fresh. As it turns out, Honda is making serious news this week with the announcement of some new iron. The bike maker proudly introduces the Africa Twin. 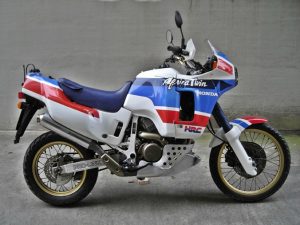 The Honda display in Milan featured the CRF1000L2 Africa Twin, The new ride bumps up the ground clearance, and suspension travel over the standard model. It also bumps up the price tag. When it hits U.S. showrooms next summer, the L2 will carry a $2,000 price premium, raising the MSRP to just under $16,000.

What else makes the Africa Twin new? Well, it features a long list of updates to the engine, electronics, and rider interface while continuing to offer an ideal balance of power and lightweight.

It’s companion piece, known as the “L2 Adventure Sport” has a larger fairing than Honda has offered before in this class of bike. Matched with an 80mm taller screen it offers greater wind protection. The Twin also comes standard with heated grips and a 12-volt accessory socket. Both models have an 18.8 litre fuel capacity, just under five gallons in American measure.

Both models have compact two-piece, radial-mounted four-piston front-brake calipers and wave-floating rotors front and rear. The rider turns on and off the lightweight two-channel ABS. You know, in case that parking lot has too few cookie lines.

Performance is, as you know, largely a function of weight/horsepower ratio. Toward that end, Honda looked everywhere for weight savings. The lithium-ion battery is 5.1 lbs. lighter than the previous lead-acid unit.

All of these changes exhibit Honda’s desire to take the lead in the sport bike/adventure bike category. The order list, even with the price premium tacked on in this country, is impressive to say the least. At least for now, the Africa Twin family looks like a winner to us. Whether Honda maintains the momentum will be for the hard-core bike enthusiasts to decide. We will be there to let you know what they say.