Home » Our World » How Did We Learn Planet Earth Rotates Around Sun?

We are on a giant rock that spins at 1,000 miles per hour and orbits the sun at 67,000 miles per hour. How did we learn that planet Earth rotates? You definitely can’t tell by looking. To us, right now, it feels like we are on a motionless and flat surface and everything in the Universe moves around us.

It took us centuries to break that pleasant illusion. We figured it out before the first humans went to space to see for themselves that we are not on a flat motionless surface.

We always knew that something was turning around, but we were not sure what it was. If you watch the sky, you will quickly realize that stars move in circles and they are not fixed in the sky at any given moment. Until the 17th century, we believed that stars around us were attached to a sphere that rotates around the Earth. Galileo and Giordano Bruno proposed that the Earth was moving not the “heavens” around us as it was believed at the time. Both scientists were imprisoned or sentenced to death for these beliefs which were considered to be heretical views.

The first idea that we are on a round surface came thousands of years ago. However, we scientifically learned and proved that the planet rotates around the sun not that long ago. Jean-Bernard Leon Foucault born in Paris, in 1819 was fascinated by science and engineering and he landed a job as a lab assistant after he dropped out from medical school and gave up on the idea of becoming a doctor. At that time, most educated people agreed that planet Earth is rotating. The only scientific evidence that they had at the time was from astronomical observations. Still, no one was able to demonstrate and prove the motion of planet Earth. 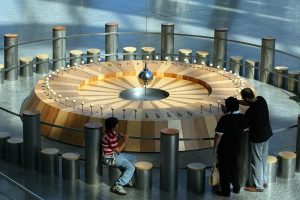 How Did We Learn Planet Earth Rotates Around Sun? Foucault Pendulum

Foucault had a genius idea on a night in January 1851, when he realized that if he could have a pendulum move in such a way that it would give it total freedom of movement, it would show the effects of the planet’s rotation. What does this even mean you might think? Imagine if you were standing at the North Pole and you had a tall pendulum swinging from side to side and tracing the path in a pile of sand. If the planet Earth is turning, the pendulum would swing in its original direction and it would move as the planet rotates. In other words, in one day, the path of the pendulum would shift little by little at each degree of a circle. The pendulum swings from one side to another, but it’s the Earth that’s moving beneath the pendulum. That proves that the Earth rotates.

Foucault thought (and he was right) that the pendulum would turn 360 degrees in one day if it was placed at the North or South pole. At any other latitude, it would take a longer time to shift and turn 360 degrees. In Paris where he conducted his experiment for the first time, the pendulum turned 270 degrees in one day which is linked to the latitude of the place where the experiment was conducted.

Only one month later after conducting the experiment alone, Foucault sent an invitation to scientists in Paris with a simple statement:

“You are invited to see the Earth turn.”

The scientists gathered in the Meridian Room of the Paris Observatory to watch the first successful demonstration of Foucault’s pendulum.

Now, you can see Foucault pendulums at full scale at universities and museums around the world.