Drinking more water will help your children, and their overall mental and cognitive health. We talk about the importance of having enough water, yet rarely focus on children. According to a study published in the Journal of Nutrition it is time to acknowledge the importance of drinking.

We spend too much time persuading children to eat their vegetables and go to bed on time so they can get enough sleep. We need to also make sure that children drink enough water. Health data indicates that approximately half of children in the US are not drinking enough water and, therefore, they are not properly hydrated.

Can lack of water cause mental issues?

In a press release, Naiman A. Khan, a professor of kinesiology and community health at the University of Illinois said:

“We’ve studied dietary effects on children’s cognition for a long time, but the opportunity to promote cognitive function in children with water intake is very important. Children are at a higher risk of involuntary dehydration. They depend on adults to recognize their needs and provide them with water.”

To see how hydration can affect children’s mental health, the team of researchers from the University of Illinois and Northeastern University looked into the water intake of 75 children between 9 and 11. They followed the children’s water intake in the course of three 4-day periods. 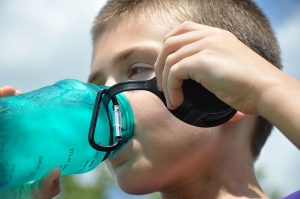 The researchers measured children’s attention and reaction times and compared it with the water intake in the previous period. They also tested their inhibition where children needed to press a button with their right thumb when they were presented with a cartoon image of a lion. However, the instruction was to not do anything when they see a cartoon of a tiger.

The final test taken was to measure children’s cognitive flexibility and their ability to quickly switch focus between the different concepts presented. They were shown two different characters (green square and blue circle with face and arms). Children must focus on colors, pressing the button with their left thumb for green and with the right thumb for blue. After that, they were asked to respond on the shape, right thumb for circle and left thumb for square. Lastly they needed to respond on color or shape based on whether the character had his hands down or up.

The researchers showed that children who drank more water had better results on all tests. It’s important to remember that other factors also might have played the role. Still, a greater level of hydration was closely related to better results on cognitive flexibility tests. Children who had 2.5 liters of water daily had significantly better scores on cognitive flexibility than those who had only 0.50 liters.

The Centre for Disease Control didn’t specify how much water is enough. Experts are saying that one liter of water is not enough.

A professor from Northeastern University, Charles Hillman said in a press release:

“Given that these aspects of cognition underlie academic achievement, it is interesting to think about low-cost lifestyle interventions, such as increasing water intake, to benefit cognitive and brain health as well as effective functioning throughout the school day.

The team of researchers will continue studying the relationship between hydration and other brain functions. They hope to use brain-imaging technology to establish brain networks that benefit most from the water intake. It’s important to understand that hydration plays a major role not only on our physical body. It also impacts our mental health, the feeling of tiredness and our cognitive abilities. This also applies to children. So make sure that your children eat enough veggies, get enough sleep and drink plenty of water.

There is also the matter of drinking potable water. It’s recommended to do a water tank cleaning and disinfection periodically and legionella sample tests just to be sure there are no bacteria that can harm your child.

6 Gifts Your Significant Other Will Love