Home » How to Follow your Dream of being a Poker Player

Very few people ever find their way to their dream career. There are so many things holding you back – fear of failure, lack of support, lack of confidence, lack of knowledge. Sometimes that perfect career might just seem straight-up unrealistic. And, hey, it’s hard to argue with people who say that certain jobs just aren’t realistic. There’s only a small handful of astronauts in the entire world, for example, and only one person can be president of the United States at once.

And yet, the reason we know that these careers exist at all is that someone out there is doing them already, so they’re at least viable for someone out there. Plus, not every job is quite so difficult to get as flying into space or leading the free world.

Assuming that you meet certain basic criteria (you’re smart enough to learn the ropes, you can access wherever the career in question is, you don’t have a fear of rocket ships etc…) usually what’s holding people back comes round to knowledge. You just straight up don’t understand what it takes to pursue a certain career.

Well, if the risk and glamour of poker is your thing, you’re in luck. Here’s what you need to consider to follow your dreams of becoming a pro poker player.

You’re pumped about WSOP 2019, you love playing with your buddies. Or maybe you’ve taken it a step further and you’re playing quite regularly at poker rooms, the local casinos or perhaps online.

It takes a lot of study, grit, and practice to make a career out of poker. Rushing it is only going to lead to rash decisions and bad losses. Understand that you’re not in it for a quick fix, you’re in it for the long haul. If you want to get to the top, make a plan of how you’re going to improve and progress.

And while we’re at it, fall in love with the process, not the goal. Achieving almost anything of note is a long game. If you’re only in it for the end result, not the daily grind of making your way there, step by step, then sooner or later you’re going to run out of steam.

Without a doubt, the most important thing you need to understand before you embark on a poker career is variance. It’s the biggest drawback and the hardest thing to endure, both financially and psychologically. Variance is the upswings and downswings that come in any poker career, and they can be a killer.

You have to understand, though, that the downswings are inevitable. Particularly early on! It stands to reason that when you first start out your win rate will be lower than that of a seasoned pro and you need to be ready. Learn to understand your win rate and accept the losses that come with it so that you can weather the storm.

That was a bit doomy and gloomy, but one of the most important things you can do when pursuing any dream is realistic. The downsides of any career don’t mean it’s not worth pursuing, but understanding them from the outset means you come in ready and prepared.

Assuming you’ve thought long and hard about what you’re doing, let’s get to some more practical advice.

A lot of this is common sense for whatever dream or goal you’re chasing, but it goes double for a game in which you have to be extremely focused so that you can make fast, smart decisions with big consequences.

So it all bears repeating: Sleep, because if you’re tired your cognition is impaired, and you probably won’t realize how much; eat well, because a healthy body means a healthy brain; stay fit, for the same reason; take time out, because you need balance. Letting any career, especially such a demanding one, take over your life is going to lead to trouble. 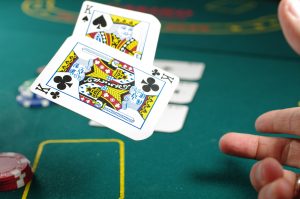 Manage your bankroll and keep a healthy cushion on hand. It’s common sense, really. Not only is having a safety net on hand good for your day to day life, but it’s also good for your poker. You can’t make smart choices at the table if you’re either:

Learn how to cope with downswings. They’re going to come and they’re going to be tough. How you handle them could be the difference between you making it like a pro and crashing out. At the risk of sounding a bit zen, accepting that they will happen and are a natural part of the process is a good place to start.

Don’t chase losses. If you feel like you’re in a rut, keep in mind that you’ve probably only lost a few hands. Don’t focus on being ‘down’ in a given game. Really what matters isn’t how you’re faring in one particular session, it’s how you’re doing across the entirety of your career. If a game isn’t working for you or you aren’t able to bring your best performance to the table, leave. What matters is your performance on a given day, it’s across a lifetime.

Review your sessions. You’re not doing this exclusively for fun anymore, and you can’t afford to simply trust your gut intuition. Take the time after a session to consider and improve on your leaks. Taking notes so that you can go over your decisions is a big help.

The recurring theme here is simply to be prepared. Following your dreams is amazing, but never follow them blindly.

Greg is a English Language graduate from the University of Manchester in the UK. He has experience at some of the most famous firms in the country, with the intention of adding to his CV. In his spare time, Greg is a keen golfer, regularly traveling around the country competing in events.

Will College Kids Be Physically in School This Fall?

What to Do When Divorce is on the...