Impressions from the Impressionists: What did they Portray and Why?

In the late nineteenth century, several French artists sought a different style of creation. They began in a way to portray their own view of the impression they got from a scene, hence the name Impressionism. As the new style developed, there was dissent from society regarding the works. In 1863, the annual salon exhibition, which was the biggest art event of the year in France, rejected a large number of works. This rejection led to many artists and society members becoming enraged with the system and created their own Salon des Refusés (Salon of the Refused). This was the beginning of the scandalous Impressionism movement.

With looser brush movement and lighter colors, the Impressionists created pieces that appeared, quite literally, like impressions, rather than straightforward representations. By leaving forms relatively ambiguous and not using distinguished lines, the painter allowed the viewer to gain a more visceral sense of the piece.

Édouard Manet, one of the first to use this method, thereby became one of the original Impressionists. Many of his pieces were scenes of everyday life. As a progressive thinker, Manet felt that art should represent aspects of life, rather than the traditional mythology or history portrayals. Manet was also one of the first few artists to rebel against the Salon due to his work being viciously criticized by conservative critics. Despite these obstacles, Manet kept painting what he wanted and made sure his work was seen one way or another.

Claude Monet, specifically his water lilies, is one of the most recognizable artists out there. He is celebrated for his usage of lighting in nature and re-creating environments from all times of day and weathers. While living in London during his 30’s, Monet was exposed to the works of J.M.W. Turner and John Constable, romantic naturalists whose methods of painting light seems to have influenced Monet’s. In fact, a technique that Manet taught Monet in regards to painting, which aided his ability to create light is called en plein aire, “outside” in French. Plein aire painting is quite literally when an artist paints outside, though a major characteristic of it is the way that lighting is portrayed in the artworks – subtle in hue and brushstroke, yet a main contribution to the piece. 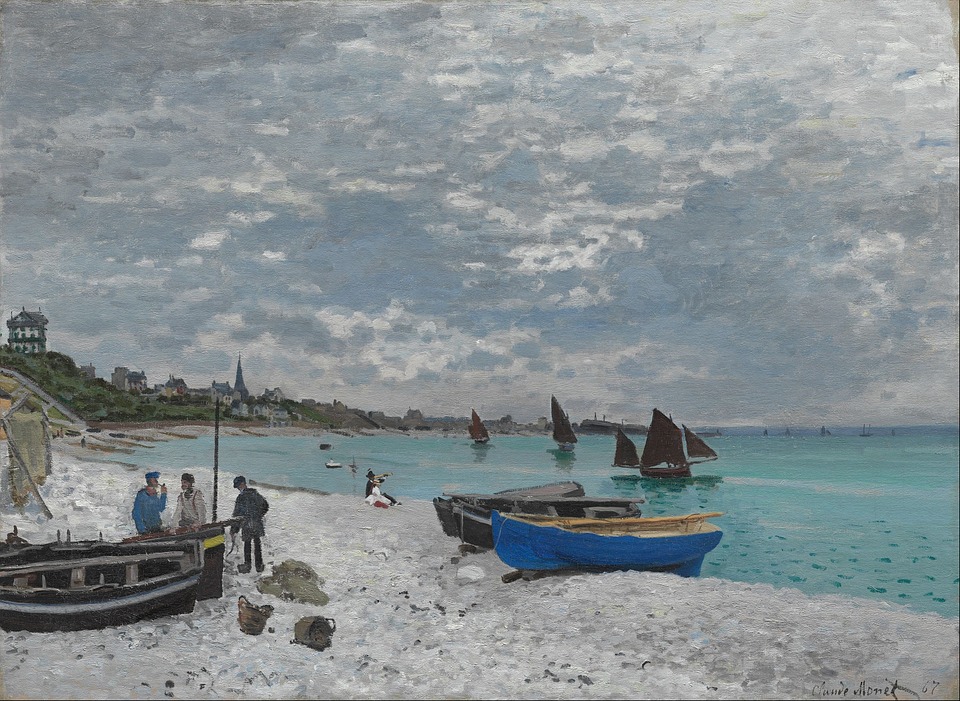 Claude Monet painted The Beach at Sainte–Adresse in 1867

Auguste Renoir utilized vibrant colors in his works, truly making him stand out from many of the other Impressionists. Yet, this color usage did not impede his stance as an Impressionist. Favoring figures, Renoir painted mostly women and during the years 1866-1872, nearly all his works were modeled by his companion at the time, Lise Tréhot. A couple of years later, Henrietta Henriot, an actress, became his favorite subject and was the model for at least 12 of Renoir’s paintings between 1874-1876.

Edgar Degas is well known for his paintings of ballerinas. He found himself drawn to painting modern life situations opposed to traditional mythology and history, similar to Manet and other Impressionist. Degas was fascinated with the way that the human body moves and all his figures tended to be captured in “unusual” poses. This appeal went against his traditional upbringing, along with every other aspect with Impressionists. Degas walked the lines of Impressionism in that he follows their approach in the ways above, as well as how they depicted lines and contour, however, did not follow their approach in the way they used color nor enjoyed painted en plein aire. Lastly, Degas employed a voyeuristic type of illustration in that he often painted from the viewpoint that a typical person would not be simply standing and staring. His pieces make the viewer feel as though they are seeing through a window, right into the scene that they would not usually get to see.

Manet once said, “I paint what I see and not what others like to see,” which perfectly expounds Impressionism. The traditional ways that artists were taught to paint conflict with nearly every approach that the Impressionists valued. Between the use of color, surface texture, mod of painting, and brushstroke, Impressionistic styles went against academic painting in its entirety.

What To Eat In Hawaii