First off, allow us to admit something. Gildshire Magazines has a love/hate relationship with Halloween. Holidays, as a whole, rock our boat. We love any chance to party, and we love candy like crazy! We put the first orange streamers up in our palatial Southern California offices on Oct. 1, making Halloween a full-month observance. Still and all, there are aspects of Halloween that tickle our bother button. We aren’t about the devilish stuff (except for yummy devil’s food cake), and we aren’t about stereotypical costumes that make people feel bad. Toward that end, we compiled a list of insensitive Halloween attire that should be avoided.  Keep these in mind when you go to Michaels for your kit. Forethought is key where costuming is concerned. Let us show you what we mean. 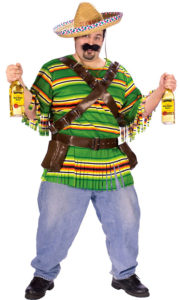 Sexy Shooter Happy Hour: Honestly, given recent events, avoid any costume that glorifies shooting. That should only make sense. This one comes complete with “poncho-style” minidress and sombrero. They both draw on exaggerated stereotypes of Mexican culture and would be considered offensive. Speaking of which…

Tequila Mexico: No culture should be automatically associated with sloth and drunkenness. (I guess one could make a case for the Irish and St. Patrick’s Day, but that’s another article.) This costume is both racially insensitive and out of step with right-thinking Americans. Skip it! Worse yet, this could be considered a flash-point costume, putting a young wearer in danger. Categorize this one under “bad idea,” and “poor parenting.” 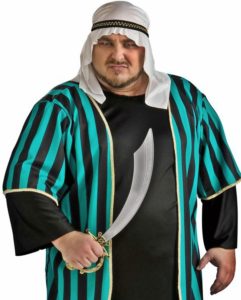 Men’s Arab Sheik Costume: Another stereotype in play here, as well as some misogyny thrown in for good measure. It’s harmful to reinforce negative pre and horribly misconceived notions about a region, religion, or group of people like this costume does. Tensions between regions are high enough. There is no good reason to put on an item that says what this one says and on many levels.

Day of the Dead Costume: Folks who are of other than Hispanic heritage shouldn’t be encouraged to wear a  Day of the Dead outfit. It is an important cultural touchstone for the Mexican culture, and therefore shouldn’t be co-opted mindlessly as a skimpy costume for the office Halloween party. Like so many of these, common sense should rule the day. 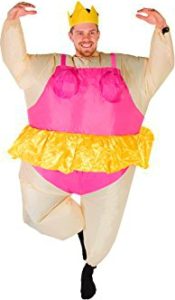 Inflatable Ballerina: We were just now talking about common sense and, “Ta-Da”, this number shows up! Unbelievable! Let’s talk about any inflatable body-suit. What does it say? Who is it targeting? Fat shaming is a major problem, particularly amongst teen and tween females. Perfectly healthy girls are crash-dieting out of a fear of being fat. We would like to call that irrational, except it isn’t irrational to them. The results can be ill health, at best, and death, at worst. In light of that, is it really a good idea to show up at the Halloween party with something like this?

Sexy Convict: The U.S prison system is broken, because this country incarcerates an incredible number of people in for-profit prisons, and the number is only growing. (Funny how “for-profit” and “growing” seem to go together.) A disproportionate number of inmates are males of color and the poor. If you are both a male of color AND poor your chances of seeing the inside of a jail is high enough to make a thinking person shudder. This sexy convict get-up trivializes the problem and sexualizes a justice system in need of repair. The family that shops together for a costume could have a discussion about the issue. That would be a very good thing.

Homeless Person or “Hobo”: Some insensitive Halloween costumes are so obviously such that we shouldn’t need to include them. Just as you wouldn’t point at a homeless person on the street, likewise you ought not to dress up as one for the office Pumpkin Spice potluck.

Does this make us party scolds? We hope not, as that was not our intention. This is an important topic, though, given the current climate. Take a moment to think before you swipe the debit card for that Halloween costume. Remember, the person you are mocking may know your boss.

Yes, we thought that would get your attention. Have fun, but be nice! Have a great Halloween! Drive carefully, because there are precious children afoot.

The Top Five Dining Gems in the Southeast