Those numbers painted on the runway, what does it mean? They simply indicate the direction the runway is pointing. When you add a zero to that number you will get the exact degree of the direction. If you see 36R, it means that the direction is 360 degrees and the letter R indicates that it’s on the right side of another parallel runaway. You might see 18 L which stands for 180 degrees heading south to the left of another runway. The numbers are never higher than 36 since 36 presents a full circle of 360 degrees.

Colored Lights on the Wings of Airplane

Maybe you have noticed a red light which is usually located on the tail, or near the airplanes’ tale. The lights are known as position or navigation lights which are always used in the dark or between sunset or sunrise or for any time of the day when there is poor visibility. They are positioned there to let others know the direction and position of a plane. Sometimes, planes have logo lights on a tail that show the logo of the company and are used for identification of the plane on the ground and in the air. With these lights, it’s easy for others to identify the location of any plane they encounter which is super helpful to them, and completely irrelevant to us, the passengers. 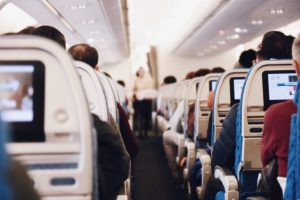 No Smoking! Why Do Planes Have Ashtrays?

Smoking is obviously not allowed in airplanes but you still can find ashtrays. Why? Because no matter what, sometimes, some people will smoke. You can find ashtrays on the lavatory doors or sometimes near the galley and they are there just in case someone smokes. This is just a safe place to extinguish a cigarette in case of someone lighting up one. It’s a better option than throwing it in the trash which could lead to a fire. Let’s keep in mind that in the US, smoking on a plane is a federal offense and planes have smoke detectors to monitor this. However, in case someone does it, an ashtray is there for the safety of everyone on board.

What is the Purpose of Upturned Edges on the End of an Airplane’s Wings?

These are known as winglets or shaklets and they are designed for smooth airflow and reduce drag which can help to save on fuel. It’s important to know that not every one plane has winglets and there is nothing to worry about if a plane doesn’t have it since every plane has different aerodynamics and they won’t always do the job.

What Are Those White Trails in the Sky?

Let’s start by saying  that white trails are perfectly normal and they are not polluting the air. White trails are formed when humid air coming from engines mixes with cold dry air and creates ice crystals. The main reason why water vapor comes from planes is because of the moisture that airplanes create in the air. A study from 2016 proved that these white trails are nothing but water vapor.

Some even believe that the white trails are controlling our minds. Needless to say, that’s far from the truth.

Hope you found these facts about air travel interesting and we hope you understand and appreciate air traveling a little bit more.

The Zorse and Liger – Animal Hybrids that Will Blow You Away

The Basics About Geocaching – Fun for the Family

Easy Ways To Keep Your Phone and Computer...