Fall is upon us, and for many, that means partaking in some hard apple cider. When you drink it, you are part of a history that goes back thousands of years. In fact, the first way to consume apples was by drinking cider, and by eating them. From ancient Rome to the early American colonies, cider is a crucial part of human history. 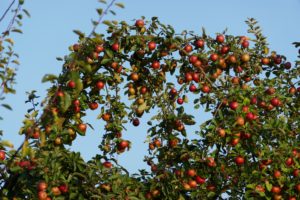 The first civilizations to enjoy apple cider (that we know of) were Greece, Rome, and ancient England. The Romans were especially fond of the alcoholic brew, and when they invaded England in 55 BC, they were surprised to find the people there already drinking it. Southern England, Spain,and France would eventually master fermenting and distilling.

In Europe, apple trees all grew from seeds, meaning people would never know what kind of apple they were going to get. Cider was originally created using whatever assortment of apples weren’t sweet enough to eat. If they found an apple they really liked, they could graft it in order to reproduce it. This allowed people to name specific kinds of apple, so by the late 1500’s, there were 65 known types in Normandy.

When America became independent from England, creating its own apple cider was very important. John Chapman, known as Johnny Appleseed, set up cider nurseries by traveling the frontier and tossing seeds. He disapproved of grafting, so the orchards that grew up were especially “American.” Thomas Jefferson recognized the status of cider, and so planted over a thousand trees at Monticello.

In those days, people drank cider like it was water, because actual water was too dangerous. While water harbored all kinds of diseases, the cider-brewing process killed bacteria and germs. A pint or more a day was not uncommon. John Adams enjoyed a large mug every morning. If you think that means everyone was drunk all the time, think again, because cider is relatively low in alcohol. This is because apples have much less sugar than grapes, so cider could be between just 4-6% alcohol. For children, a version with less alcohol was made, called “applekin.” 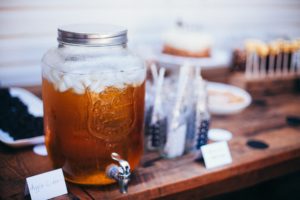 Cider was essential to American life. If someone didn’t have money, they could easily barter or even pay bills with cider. Cider was also promoted as a healthy elixir and recommended to treat poor digestion, gout, fevers, and more.

When immigration started in earnest from Germany and eastern Europe, beer started to take over. These were groups that were used to growing grain and hops, and not orchards. When Prohibition was enacted, many of the old apple orchards were destroyed, setting back cideries for years to come. However, the drink has been making a gradual comeback. Sales are high – in 2014, apple cider brought in over $350 million. If you’ve never tasted real hard cider, you might be surprised that it really isn’t that sweet. It’s more like sparkling wine or champagne. Some varieties can be warmed up like the unfiltered apple juice we call “cider,” but most are best at room-temperature. Cider is a great option for people who dislike the taste of beer or who are gluten-free. Some especially good brands include Aaron Burr Cidery, which makes a cider with ginger, and Normandy’s Domaine Dupont, one of the first cideries that promoted a return to apples meant for ciders, not eating.

Here are some more brands that people have taste-tested!

Another type of alcohol that has been surging in popularity is hard soda. Click here to find out more.

The Buzz About Burt’s Bees

Fashion Mistakes Men Can Avoid and Their Best Alternatives