Home » Our World » Is Asteroid Mining the Solution?

The idea of extracting valuable minerals and material from asteroids is very interesting to rich businessmen. Returning them to the Earth for profit to build space habitats or solar-power satellites, is not an easy task. It might seem like an idea from a sci-fi movie but it’s not impossible as it might seem to some.

Although the idea of mining asteroid might sound like science fiction, companies such as Planetary Resources Inc has a serious plan on mining asteroids.

The conclusion from the recent study is that it appears completely feasible to identify, capture and return materials from an asteroid to Earth.  For asteroid mining to be viable and feasible it needs to start with the development and observation of any potential target asteroids. Also, there is a need for the development of a powerful solar electric system that is necessary for transportation. The final step is establishing the need for human presence on asteroids or if it would be done all by robotics. If it would be done solely by robotics, what human involvement we would need.

In the end, the easiest approach that has been determined so far is using new technology that can help us detect asteroids. Then transfer the material in orbit using robotic spacecraft which is powered by solar electric energy.

The stat from Statista shows that estimated profit from asteroids mining is most cost-effective for companies who decide to be a part of it. The value from materials presented on the Ryugu asteroid and a total estimated value is approximately $82.76 billion. The profit is about $30.08 billion without the costs of mining. So, it’s safe to say that although asteroid mining is very expensive, it’s also very much profitable.

When a bill was assigned in 2018 for an increase of a budget for NASA, a Texas senator said: “I’ll make a prediction right now. The first trillionaire will be made in space.”

The raise to asteroids is on with a few private companies competing for funding to become space miners. Before Ted Cruz, Peter Diamandis, the founder of X Price also predicted that billions will be made in space. Neil DeGrasse Tyson, the TV host, and astrophysicist concluded that money will be made through asteroid mining.

The investment bank Goldman Sachs reassured their client about the benefits of investing in new initiatives of asteroid mining. As per their report: “The psychological barrier to mining asteroids is high, the actual financial and technological barriers are far lower.” 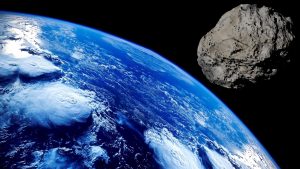 How would an asteroid be mined?

The first idea behind asteroid mining is that it will likely be powered by solar energy. As you can imagine this will reduce the need for fuel that would have to be delivered by spacecraft to an asteroid. Another important thing on that note is that the equipment needs to be lightweight to be transferred safely to an asteroid. Additionally, to make a transfer easier, experts have been in favor of robotic equipment use to limit personal needed. This would reduce the number of supplies required for a manned mission.

The methods of mining would be like those on Earth. The method of scraping the desired material. However, in space majority of ore might fly off so there would be a need for a large canopy that will collect it. Since there is no gravity on asteroids, grapples should be used to anchor themselves.

Once the material is mined, rocket fuel for a spacecraft could be produced. This can be done by breaking down water from the asteroid into oxygen and hydrogen. The equipment can be also transferred to the next asteroid.

So far, we have concluded that mining on an asteroid will revolutionize the supply of resources for humanity. The Near-Earth Asteroid (NEA) suggests that the mining should be focused on high-value minerals. This way, the mining process is economically valuable and feasible.

It’s estimated that more than one hundred spacecraft and operation of five years would lead to the break-even point.

The technical and economic approach to asteroid mining is the best assessment towards understanding if asteroid mining is feasible. Mining for simple materials that can be found easily on the Earth is not going to be economically and financially feasible.

Finding opportunities that can’t be found on the Earth or valuable material in a great amount in one place are feasible ideas for humanity and our future.