Is It In the Cards For J.C. Penney to Survive?

Back in 1902, Mr. Penney opened a store in his hometown. It was Kemmerer, Wyoming 50 miles from the nearest town of appreciable size. He named the new store, “The Golden Rule.” What a great name! It speaks to what makes any group of people the foundation stones of a polite society. Oh, did I mention Mr. Penney’s full name? James Cash Penney…aka J.C. Penney.

The Golden Rule was more than just good advice. It became the standard to which the J.C. Penney corporation held its employees. However, almost 117 years separated from J.C.’s store, the golden rule for a retailer is a very different thing. Now it is to be relevant unto others, or they will completely stop doing anything unto you. Yea, verily, verily. Open your hymnals to #449. 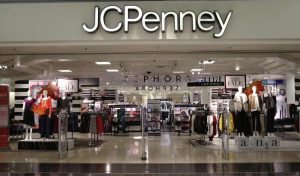 Ten years after he opened The Golden Rule, J.C. changed the name of the store into what we know it as today. It has been a going concern in medium-sized towns and small cities ever since. Now, it is dangerously close to the abyss that is slowly claiming Sears holdings.

Poor business decisions from long ago and the current online-centric way of doing the retail thing has J.C.Penney in jeopardy of going under water for the third time. Debt-heavy, and with real estate woes J.C. Penney is under the gun to find solutions. The fact that they have an empty chair in the CEO’s corner office isn’t helping matters.

Where will they find these solutions they need so badly? Gildshire asked some business analysts familiar with the situation. Here are the answers, none of them perfect. Since retail stores located in malls are a gamble under the best of circumstances, we will use poker analogies.

J.C. Penney could sit tight and hope things get better. They have almost two years’ cash on hand. By itself, that puts them in a better situation than most companies who ultimately fail. But, struggling retailers are finding it hard to restructure debt. Their creditors want green money now, and sooner would be better. If a “hold ’em” strategy is to work, J.C. Penney needs this Christmas season to blaze like the tree in Rockefeller Plaza. A booming first-quarter in 2019 would help matters, as well. That’s tougher yet with low morale among the ranks, as we are told J.C. Penney is experiencing. 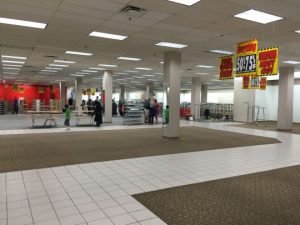 Is J.C. Penney as a brand already dead, awaiting only the keeners and wailers at the casket? It is possible that a liquidation sale is imminent, but that may not ultimately solve the problem. There is tons of real estate acreage on the market. Experts tell us that an “Even the plumbing fixtures must go” fire sale won’t result in “Cashapalooza.” More likely there’ll be just another lonesome landscape where the anchor store of the mall used to be.

Break the Seal on a New Deck of Bicycles:

The best chance for Penney to survive might be to rethink how it operates at the customer service level. As we see it, J.C. Penney has two assets to its name. Sephora is going well. The customer base is loyal, albeit aging quickly. The company could lead with these two strengths and load the shelves with private-label and moderately-priced goods. Through that process, it could find its way to profitability and an ultimate comeback.

There would be some deep breaths and gulping to that strategy. It would mean kicking to the curb all that’s not working, retaining only what current customers state that they want. Since-departed (and un-replaced) CEO Ron Johnson, took an exactly opposite approach and it did not work.

J.C. Penney is stuck with its mall space. But who is to say it couldn’t lease some of its square footage to selected specialty retailers? They might draw in some new (and maybe even younger) blood. Some suggest Irish clothier and outfitter Primark. It’s an interesting idea.

There have been preliminary discussions between J.C. Penney and IKEA about combining J.C. Penney home furnishing space with Ikea, calling it “IKEA Boutiques.” Some folks (non-DIY folks for sure) will be put off, but analysts believe those who come in will outnumber the ones who leave.

Given the urgency of Penney’s position, the company will need to go quickly if it takes this approach. Returning to the poker analogy, Penney doesn’t need to come out on top all-in right now. But, it needs back-to-back winning hands to gain a momentum jolt.

Some luck, in terms of a pair of aces in the hole, would help, too. Their chips are dwindling and it’s getting late. 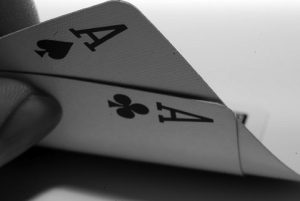 You’re Looking Through Last-Gen Side Mirrors