Caluso is a municipality of just over 7,000 residents, located about 30 kilometers northeast of Turin, Italy. There are more women than men and more senior citizens than youngsters here. Perhaps that’s why the figure in the distance, a young male, is alone while he practices on his craft. Back and forth, he glides on his skateboard. His stance, left-foot back, is called “goofy,” or “goofy-foot,” but he makes it graceful. Every once in awhile he gains speed and soars into the air, his board a whirling dervish, spinning under his feet. No one is around to applaud his skill. Only he, with lips pursed in concentration and hazel eyes clear and focused, knows what this morning is about. Today is an aria of athletic solitude, but tomorrow will be a symphony of athletic prowess. It’s 2008, and the lonely boarder is nine-year-old Ivan Federico.

Nine years later, Ivan Federico’s lonely hours are paying off. His participation in the recent X-Games/ Minneapolis (where he finished just one spot off the podium in the Toyota Skateboard Park Final) is but a small dot in the mark he is making on the skateboarding world. Mr. Federico is a rising star.

Outside of Italy, Federico was a relative unknown before his top three finishes on the Vans Park Series tour brought him into the spotlight. Now, entering the prime of his athletic potential, he’s prepared to turn thirds into seconds and seconds into championship trophies.

Listing fellow-countryman Marco Mina as an inspiration, Ivan Federico is loving the life he is leading. The Vans Park Series takes him all over the world and to different types of skate venues. No two ramp setups are alike, and all provide the challenge that is a young athlete’s lifeblood. From Sydney, Australia to Huntington Beach, California to the upcoming World Championships in Shanghai, the Vans competition is young Mr. Federico’s stage. 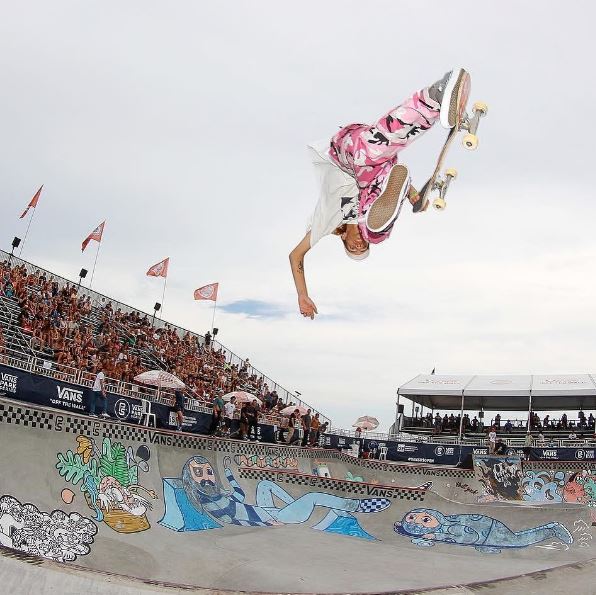 Ivan Federico competed in a number of events before first finding podium-level success in June of 2016. That’s when he wowed the crowd in the semi-finals in  Florianopolis, Brazil. He followed that up later in the same month with a first-place finish at the Sosh Freestyle Cup event in Marseilles, France. A month later, he finished first again, this time at the Vans Pro Skate Park Series Finals at Vancouver, British Columbia. Two months, three Continents, a second and two first place finishes. Ladies and gentlemen, meet Ivan Federico, announcing to the skateboard world that he is here to stay.

Dashingly good-looking in a carefree sort of way, Federico’s success on the circuit has translated into a serious social media following. At this morning’s count, he had 2,455 Facebook followers and almost 50,000 followers on Instagram. By this afternoon there will be more followers. Combine that with a significant following on the industry-specific site called “Boardriding” and the mark Ivan Federico is making begins to come into focus.

So what is next for a young man and his Embassy skateboards? When you’re two years shy of 20 years old, a world traveler and a championship caliber athlete, you would appear to have the world by the tail on a downhill run. Maybe it is time to take a break and let the applause wash over you. That isn’t how world-class athletes roll, however. Ivan Federico will continue to hone his skills. After all, he’s the same driven athlete as he was when he was nine years old and skating alone in Caluso. Only now, there is an adoring throng and a cash prize at the end of the next jump. Maybe he does have it made, after all.