The winding path toward resolution of the Johnson & Johnson talc/cancer case took another turn this week. Thursday, a jury in Missouri awarded over $110 million to a Virginia woman who claims she developed ovarian cancer from using Johnson & Johnson’s talcum powder-based products. According to Courtroom View Network (CVN), the plaintiff says she used them for decades on her genitalia. This marks the largest verdict yet after five previous trials.

The trial lasted three weeks. Jurors deliberated for just over a full day. They awarded 62-year-old Virginia resident Lois Slemp $5.4 million in compensatory damages and $105 million in punitive damages. Imerys Talc America, Johnson & Johnson’s talc supplier, was also assigned one percent responsibility, so $50,000 of the punitive portion of the verdict goes to them.

Slemp used products such as Johnson & Johnson’s Baby Powder and Shower to Shower for decades. She is currently undergoing treatment after her ovarian cancer spread to her liver. Ms. Slemp’s declining health caused her case to receive expedited consideration.

This means it’s over, right? Not so fast.

The Guardian says Johnson & Johnson is losing, but the Insurance Journal recently said two lawsuits were thrown out. Johnson and Johnson’s stock price (JNJ: NYSE) jumped over 120 points the same day the verdict came down. Which is it? Clinically proven mild? 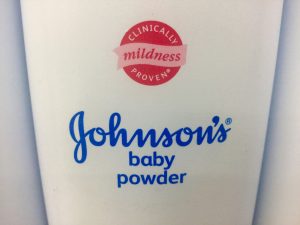 The company has spent millions of dollars on publicity, attempting to counteract the effect of the lawsuits they are losing. They cite studies, such as the CDC‘s, that say talc has not been named by the regulatory body as one of the cancer-causing agents. They cite also the independent Cosmetic Ingredient Review Expert Panel, an important expert body:

“talc is safe in the present practices of use and concentration.”

The sheer number of lawsuits against J&J are daunting, to say the least. Almost 1,700 lawsuits are in progress or pending in state and federal court, accusing the company of ignoring studies linking its talc products (e.g. Shower to Shower) to ovarian cancer.

This week’s verdict follows damages decisions of $72 million and $55 million against the company this year. The company is appealing both verdicts.

The human toll suffered by families.  That is the real story in play. Whatever the final legal outcome, mothers, daughters, and sisters are seeing their lives forever altered. A legal finding won’t change that. Certainly, the ultimate responsibility to be borne by Johnson & Johnson is important. But, the truth about a product and substance used by women and on their innocent babies. We will be getting somewhere real when those facts come clear. Let’s hope it is soon. Lives depend on it.

Can You Eat Your Way to Clear Skin?