Home » Our World » Karma Automotive’s Electric Truck on the Way

Inspired by, or repelled by, the Tesla truck, Karma Automotive, the China-based carmaker plans to throw its hat into the electric truck segment. The electric truck lineup will then feature the Tesla, the Ford/Rivian partnership production, and Karma, which is the company that came out of the Fisker collapse in 2013. What makes Karma different, however, is its plan to build both a pickup and an off road capable SUV on the same platform. Gildshire, intrigued by the idea, asked for help from Bloomberg for more research on Karma Automotive’s electric pickup and more.

When can we expect these plans to turn into a truck?

That’s what is interesting to us. This isn’t a “down the road bye and bye” plan. The Karma Automotive truck is scheduled to debut as a concept later this year.

That is correct. Now, don’t forget that it is a “concept,” and may not represent exactly the company’s plans for the production truck. Kevin Pavlov is Karma’s COO. He said the model will ride on a brand new platform the company built specifically for electrified vehicles. It will be available as an all-wheel-drive rig, which is essential in the worldwide pickup market.

This isn’t the first time Karma has talked about a truck. Didn’t they release some kind of teaser photo of such a thing?

Yes, it is pictured just below. But that one was not going to be fully electric. Instead, it was a gas-electric hybrid. Actually, the company is still working it over, with an eye to producing it close to the time that they produce the all-electric model. “Extended-range powertrains represent a smart alternative to full battery systems,” affirmed company CEO Lance Zhou in 2019. 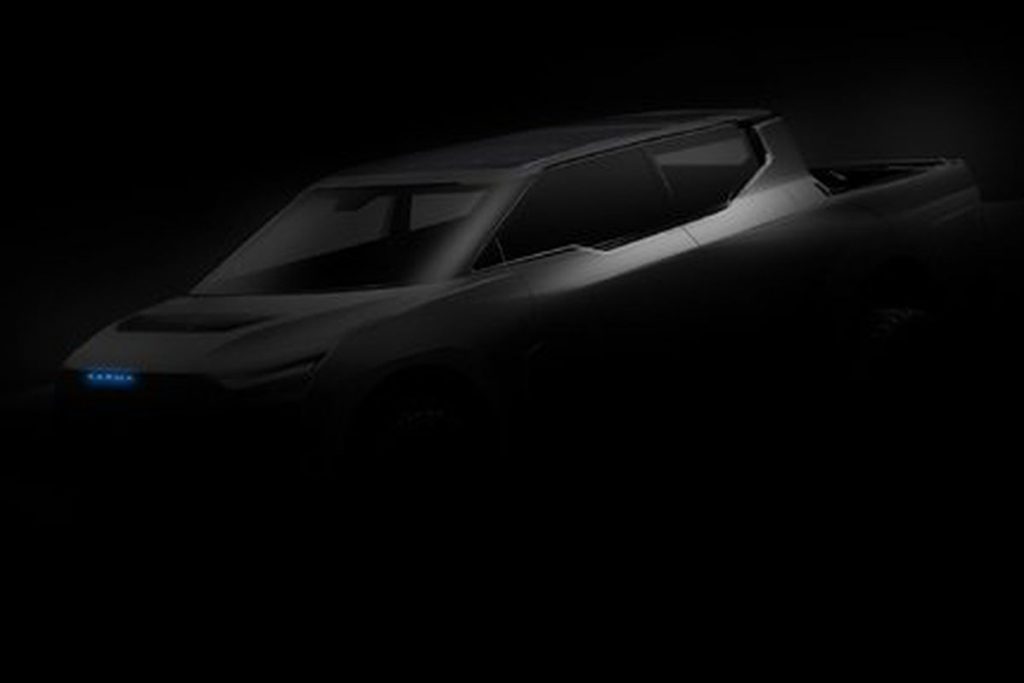 Karma Automotive’s Electric Truck was teased earlier with this photo.

It is. Perhaps too ambitious to become a reality, at least as soon as they are saying.

You said they are building an SUV, as well? So that would be three separate vehicles.

Yes, but the SUV will make use of the pickup’s basic architecture. Karma’s corporate and build advantage is that they aren’t starting from scratch. In fact, Karma currently sells a 403-horse plug-in hybrid car named Revero.

I have never heard of it.

That isn’t surprising. They only sold 1,000 cars last year. No doubt, the car’s $135,000 sticker price eliminates much of the car-buying public. The company assures us that the truck will not be that expensive, though how much less expensive remains to be seen. But, it will be, a high-end model truck. Don’t expect it to land in the bargain aisle.

This may be a good time to get into this segment of vehicles. Right now, buyers in the market for an electric truck have the Tesla to choose and nothing else. Goodness knows, not every electric truck buyer is going to find the Tesla entry appealing. But the stakes are high, and the possible rewards are immeasurably higher. Trucks rule America’s sales figures, and have for decades. Not to mention that SUVs are all over the highways, and that segment is only going to grow as the Baby Boomer generation ages, and Generation X and the generations behind them have more children. It’s a hot market Karma Automotive’s electric pickup makes it that much more interesting.

Looking for Your Passion? Why Should you Stop and What Should You Do Instead?