There are horse races held every Saturday at race tracks all over the country. Tens of thousands of pounds of horseflesh, racing around an oval track. Tens of millions of dollars are wagered on these finely-tuned equine athletes. However, this Saturday (May 4) shortly after 6 pm Eastern/3 pm Pacific, every race track except for one will pause. The Kentucky Derby will be run at that time, and every serious horse race fan in the world will be watching. Gildshire will be watching and making one more mental pledge to be there in person at least once. It is a spectacle unlike any other in American sports, and it’s done in just over two minutes. That’s why we wanted to answer some questions we have been asked about the Run for the Roses. So, read on for Kentucky Derby questions and answers.

The winning horse has a garland of roses placed around its neck in the Churchill Downs Winner’s Circle.

2. How long has the Kentucky Derby been going on?

Churchill Downs opened in 1875 and hosted the first Derby in its inaugural season. Interestingly enough, the “inventor” of the Derby was Meriwether Lewis Clark Jr, the grandson of William Clark of Lewis and Clark and the Corps of Discovery fame.

3. Who won the first Derby?

The winning horse was Aristides, ridden by Oliver Lewis.

4. Has an African American jockey ever won the Derby?

See above: Oliver Lewis was African American. In fact, 13 of the 15 riders in the first Derby were black. African-American jockeys won 15 of the Kentucky Derby’s first 28 runnings and 11 of the 15 Derby’s between 1875 and 1902.

Actually, “mare” is a name given to a female horse over the age of three.

Only three -year olds run in the Triple Crown races, of which the Kentucky Derby is the first. It is followed by the Preakness Stakes two weeks after the Derby, and the Belmont Stakes, three weeks after the Preakness. But, to answer your question, three-year-old female horses are called fillies.

Thirty-eight fillies have entered the Derby, and three won it. The girls who prevailed against the boys were Regret in 1915, GenuineRisk in 1980, and Winning Colors in 1988. 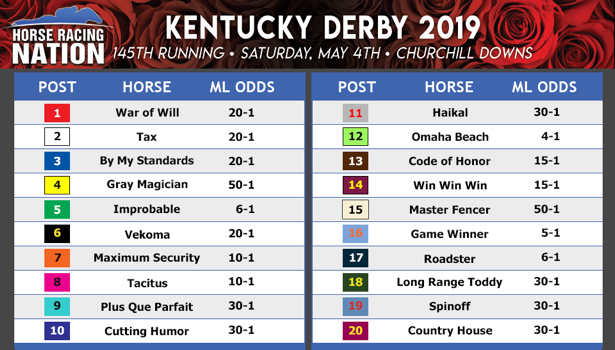 The post position for the running of the 2019 Kentucky Derby.

8. Are there any fillies in this year’s Derby?

No, and their participation is becoming ever rarer. That’s partly because of a rich stakes race for fillies that is run the day before the Kentucky Derby. That’s the Kentucky Oaks and is always a competitive race.

9. How far do the Derby horses run?

The race distance is 1.25 miles, a challenging test for these horses because most of them will not have run further than 1 1/8 miles in their careers. Some haven’t exceeded a mile.

10. You mentioned that this is the beginning of the Triple Crown. Is the Kentucky Derby the longest of the three?

It is the middle distance of the three Triple Crown races. The Preakness, run at Pimlico outside Baltimore, is 1 1/8, and the Belmont Stakes is a full 1.5 miles.

11. Who do you think will win the Kentucky Derby?

That’s a hard one, and it is one of our own Kentucky Derby questions. You see,  the betting favorite has won the last several Kentucky Derby’s, and this year’s favorite (Omaha Beach) was pulled from the field earlier this week. So, it may be a wild and wide-open race. If I had to pick a winner, I would choose “Improbable,” starting from the #5 post position. All of the horses, and their post positions are on the picture at the top of the article.

12. I think I will watch the Kentucky Derby this year!

You should. It’s not only a race. It’s a spectacle of people wearing big hats and drinking $10 mint juleps. But, hopefully, I answered your Kentucky Derby questions.