Kia Stinger Looks to Buzz Past the Competition

Home » Our World » Kia Stinger Looks to Buzz Past the Competition

“Step up your game!” That’s the message car buyers have sent to Kia over the last five years. The South Korean carmaker first hit our shores with the cheap Rio. Then came the more-advanced Soul. We liked both cars. Since then, though, something has been missing. Hyundai has beaten Kia’s time when it comes to styling, and countless other car companies are eroding Kia’s hold on the inexpensive car market. So, “Step up your game!” According to reports this week from Car and Driver, Kia’s response is a stinger. More accurately, Kia responds with a Stinger. The Kia Stinger is set to dazzle lovers of style and blow the hair back on lovers of performance. Gildshire’s Car Magazine examines the new kid on the block.

When a carmaker decides on a new model, the first question is universal. Who is the competition? In the case of the Kia Stinger, Audi’s A5 Sportback and BMW’s 430i Gran Coupe is the target. Kia set out to lure potential Audi and Beemer buyers with something they may not be able to refuse. Namely, a sticker price $10,000 lower. 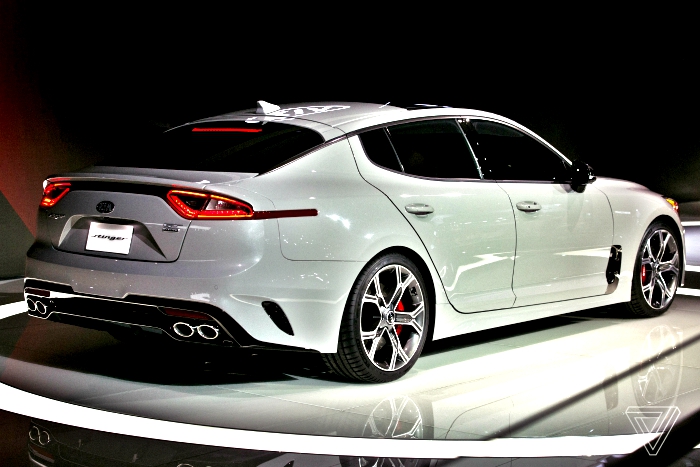 Next question? How to power it at that price point so enthusiasts will be excited while bean counters hold their fire. The $32,795 MSRP includes a turbocharged 2.0-liter four-cylinder engine that pumps 255 horsepower to the four-door hatchback’s rear wheels. Equally intriguing, the eight-speed automatic transmission. (We’re suckers for paddle shifters.) Also, inside the cabin, find leather seats, a 7.0-inch touchscreen infotainment system that is Apple CarPlay and Android Auto compatible, and dual-zone automatic climate control.  A lot of car for a price one 4K television over 30 grand.

The Kia Stinger can get fancier if that’s what’s on the agenda in the showroom. While all-wheel drive is a $2200 option throughout the entire Stinger lineup, things can get even more interesting from there. Opting for the Stinger Premium will push the model’s price to $37,895. “Premium” means LED headlights, a sunroof, a 7.0-inch digital display in the instrument cluster, and an 8.0-inch touchscreen infotainment system with navigation.

Hs Kia stepped up its game with the Stinger line? Early returns are positive. Now, the carmaker waits to see who comes in the door, and how many of them there are. We will watch with them.

Mass Production Farming Processes and the Impact on the Environment