Gildshire has psychic powers. When we touch the side of our heads just so, we can hear your thoughts. Some of you want a cheeseburger in the worst way. A few of you are anticipating a special evening with that special someone. John and Julio are deciding whether to go to work or call in sick tomorrow. But many of you are thinking about how ready you are for some football! So are we! It has been eleven years since New England beat the L.A. Rams in Super Bowl XLVIII. Or at least it feels that way to your football-starved friends at Gildshire. So, with about three weeks to go until the start of the season, Gildshire wants to answer some questions facing teams in the NFL. Today, the AFC East.

There were rookie quarterbacks scattered throughout the league when the 2018 season started. In whatever order, pundits assumed that Sam Darnold, Baker Mayfield, and Josh Rosen would succeed. But, what about Josh Allen with the Buffalo Bills. Didn’t anyone expect great things from him? Frankly, no. Words like “stretch,” and “project” were bandied about the big hard-thrower from Wyoming. On his way to proving his critics at least half wrong, Allen got hurt last year. Will he rebound from injury and continue his progression? That’s the question on the minds of Bills’ fans today. 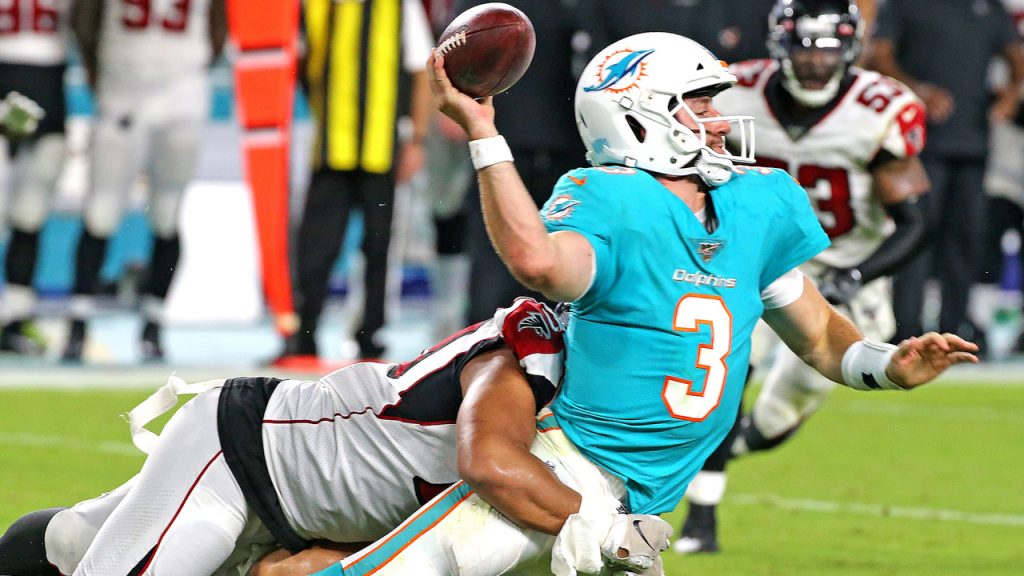 Perhaps nowhere are the questions facing teams more profound than in Miami. Here, Josh Rosen gets sacked in a preseason game.

Speaking of Josh Rosen, the Arizona Cardinals made him their Number One pick last season, only to cast him aside for a snazzier model in the form of Oklahoma’s Kyler Murray. They traded Rosen to Miami where he would, everyone assumed, revive his career as the Dolphins’ starting quarterback. But wait! Word out of Dolphins’ camp is that veteran bearded bomb-thrower Ryan Fitzpatrick is ahead of Rosen at this juncture. Do the ‘Fins have two quarterbacks? Do they have any? Miami football fans wonder.

Patriots’ quarterback Tom Brady is 42 years old. He wants to play until he is forty-five. The Patriots have him signed for one more year. Whither Tom Terrific after that? Let’s face it. When you are a Patriots’ fan, few things about the regular season stress you out. Your concern isn’t even this season’s playoff run. New England fans have one nightmare. That would be Tom Brady in another uniform, beating them.

Last season revealed a lot about one team. No, that team was not the Jets. The Pittsburgh Steelers were the NFL version of “Days of Our Lives.” Now, disgruntled ex-Steeler wide receiver Antonio Brown is on the Raiders. Full-season holdout runner (and ex-Steeler) Le’veon Bell is with the Jets. Will Bell have fresh legs and rush for 2,000 yards? Or, will a year off have eroded his skills and made him less than he was before. If Jet’s second-year quarterback Sam Darnold is to improve, Bell must contribute in a big way. Jets’ fans are hopeful that Darnold will work well with offensive-minded Head Coach Adam Gace because they are pretty tired of looking up at the entire division.

That’s our look at the questions facing teams in the AFC East. Come back again as we preview the season in a Gildshire kind of way.

Top Tech Startups To Keep Your Eye On