Kickoff 2019: Questions Facing the Teams in the NFC East

Home » Kickoff 2019: Questions Facing the Teams in the NFC East

Having broken down the American Football Conference over the last two weeks, we are faced with dissecting the NFC between now and the start of the new football season. What better place to start than in the always entertaining NFC East? That’s where some of the sports’ most prestigious teams live. It’s also where potential playoff contenders reside. Are the prestigious teams and the contending teams one and the same? That’s what Gildshire intends to discover when we ask the questions facing the teams in the NFC East.

Philadelphia Eagles, last season 9-7. Lost in the divisional round.

It can sound trite to say a team should do well if its starting quarterback stays healthy. That’s true for over 25 teams! But, Eagles’ quarterback Carson Wentz must shake the injury bug that has dogged him since he got into the league. Wentz possesses the tools to be great. But his career is a long surgery interspersed with potential. If (big if) Wentz plays 16 games, Gildshire believes the Eagles are the favorites to come out of the NFC. But, long-time backup Nick Foles is in Miami now, and won’t be walking through that door anytime soon.

Dallas Cowboys, last season 10-6. Lost in the divisional round. 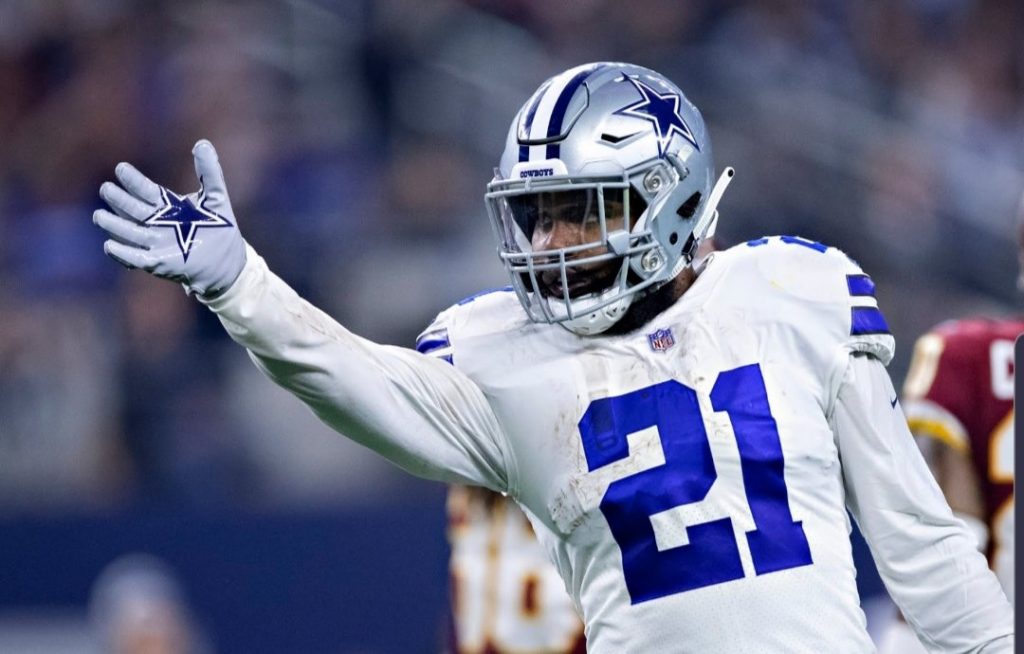 Cowboy running back Ezekiel Elliott can’t terrorize the NFC East while he’s holding out in Mexico.

Cowboys’ fans are some of the league’s proudest supporters. They are fond of talking about “the rings.” Gildshire has a new rule. You don’t get to talk about “the rings” if you weren’t alive for any of them. That muted 50% of the Dallas faithful because the Cowboys’ Super Bowl drought is at 23 years this season. Can they get another one in 2019/20? Training camp has been in tumult, as runner Ezekiel Elliott is holding out for a new contract. (We should all be able to negotiate from Cabo San Lucas.) Quarterback Dak Prescott’s contract talks are stalled while the team tries to bring Elliott into the fold. Through it all, Dallas has a solid-to-very-good team and should make the playoffs, if not advance. Stay tuned for the Cowboys’ news though. It will never be any too quiet in Big D, ring talk or not.

The once-proud Redskins haven’t seriously contended in years, and the reason is simple. The ‘Skins haven’t had an experienced and healthy quarterback they could rely upon since Sonny Jurgensen was behind center. Mr. Jurgensen is 85 years old. Last year, Alex Smith took over at quarterback and played well until a leg injury ended his season. He’s not ready to go to start the upcoming year, so rookie Dwayne Haskins gets the reins, eventually. Until then, journeymen Colt McCoy and Case Keenum fail to inspire enthusiasm from some of football’s most excitable fans. That can’t be good.

The season hasn’t even started yet, and the New York Football Giants have a quarterback brouhaha on their hands. Big Blue’s incumbent QB is Eli Manning. He’s solid, if unspectacular, and has two Super Bowl championships on his resume’. The G-Men drafted quarterback Daniel Jones out of Duke in this year’s draft, expecting to groom him for the future. Can you guess what happened? Jones looked better in the preseason, throwing against lesser competition. The already impatient Giants’ fans are beginning to demand that the new gun be the starter. Add to that, the need to replace All-Pro receiver Odell Beckham Jr, traded to Cleveland. Will Jones get his chance or is this still Eli’s team. Stay tuned for that answer, coming up in less than two weeks.

That’s our breakdown of the NFC East, with the National Football League Opening Weekend looming. It’s quite a conglomeration of talent and controversy…and we wouldn’t have it any other way.