Kickoff 2019: Questions Facing the Teams in the AFC South

Home » Our World » Kickoff 2019: Questions Facing the Teams in the AFC South

Two divisions down and six to go as we anticipate the start of the 2019/20 NFL season. There is much to discuss in each division. But the questions facing the teams in the AFC South are vexing indeed. Is your team’s quarterback the right one to lead your squad to victory? Has the injury bug finally run out or is it Infirmary Central again in your locker room. Can your coach be believed when he says, “All is well?” Gildshire will tackle these and other questions as the AFC South takes shape before our very eyes.

Is there a more frustrated fan base than the Colts’ fan base? For years they have waited for an injury-plagued Andrew Luck to lead this team to the destiny he seemed to possess. But, injuries and mysterious ones at that hamper Luck at every turn. This year it is his ankle if it isn’t his Achilles if it isn’t his knee. We kid you not, because those are the mixed signals out of Colts’ camp. Jacoby Brissett is Luck’s backup, and he isn’t bad. They may need him for more than a few games. 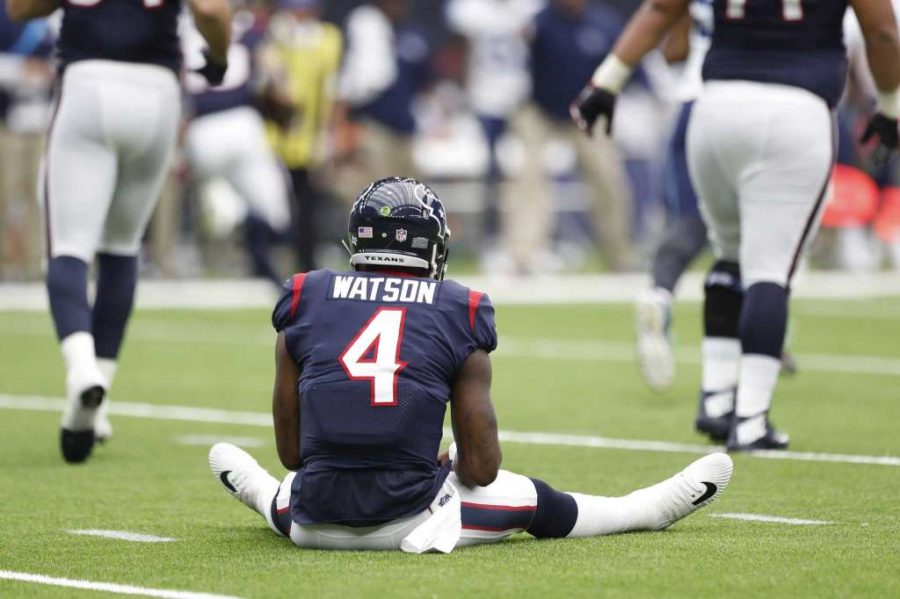 Houston can win the AFC South if this is NOT a common theme during the 2019/20 season.

When the subject of frustrated fan bases comes up, Houston’s isn’t too far behind Indianapolis. However, there is hop brewing in H-Town if, and it is a big if, the Texans’ offensive line can keep Deshaun Watson upright. Besides Watson, the Texans expect to have wide receivers Keke Coutee and Will Fuller for the opener. The addition of DeAndre Hopkins completes a talented stable of receivers. Texans’ coach Bill O’Brien is making optimistic noises. Are they substantive or is he talking through Bum Phillips’ hat? That’s what the next three months will tell us.

It is said that NFL quarterback is the most important position in all of sport. Perhaps that’s why our tour of the AFC South seems QB-heavy. The Jaguars brought in Super Bowl MVP Nick Foles from Philadelphia to see if his magic extends beyond Center City. If it does, the Jags defense can help him carry this team to a playoff run. Can Foles elevate a so-so receiving corps? Can he keep the offense from being one-dimensional to the running side of things? If so, there could be a surprise contender in this division.

This must be the year for Titans’ quarterback Marcus Mariota. The former Heisman Trophy winner hasn’t been bad. He’s been okay, but he needs to be better starting at the beginning of the upcoming season. Mariota has been banged up, beaten up, and playing in a run-first system. Adding A.J. Brown and Adam Humphries to a receiver group that already has Corey Davis, and tight end Delanie Walker should help Mariota achieve goodness, if not greatness. The Titans’ running game and defense are stout and will carry their share of the load.

That’s the AFC South in a nutshell. Next up, the AFC West or, as we like to call it, what’s up with the Raiders today?

Lincoln: “Your Car Keys Are So Yesterday”