The just completed New York Auto Show saw a host of new products by many manufacturers. Audi, Mercedes, and Toyota all debuted variations on the ubiquitous SUV theme. Hyundai teased its new “Venue,” which will compete with Kia’s Niro and the like. Nissan celebrated the anniversary of the “Z” car by slapping some stickers and badges on their current “Z” car. In other words, the New York Auto Show was good, but it didn’t make the earth move under our feet (much less bring the sky tumbling down). However, there was a persistent buzz about two U.S. automakers. Around the Starbucks kiosks at the show, Cadillac and Lincoln were topics of conversation. Gildshire’s Lev Radin was there (as he is whenever news pops in the Big Apple) to pick up on the buzz.

The New York Auto Show is historically a place where luxury models debut, and so it was this year. However, this time “luxury” didn’t necessarily mean cars big enough to double as yachts at a moorage. Cadillac, building on recent success, showed off its new CT5, which is a replacement for the ATS. Cadillac continues to make use of model names made from letter/number combinations and believes there remains room in its car lineup for actual cars. This is in contrast to so many makes who are largely eschewing cars for SUVs and crossovers.

The CT5 took its initial bow last month in an online debut accompanied by much fanfare. In introducing the new car Andrew Smith, Cadillac’s Executive Director of Global Design, proclaimed,

He has a point in distancing the new CT5 from the crowd. Its smooth fastback design looks like a bird in flight, even while parked at the curb. The 2-liter, four-banger (though that expression seems somehow disrespectful for a car that looks like this one.) turbo engine comes standard, but drivers who think of themselves as enthusiasts will upgrade to a 3-liter, twin-turbo V-6. Both engines are paired with a 10-speed automatic transmission. 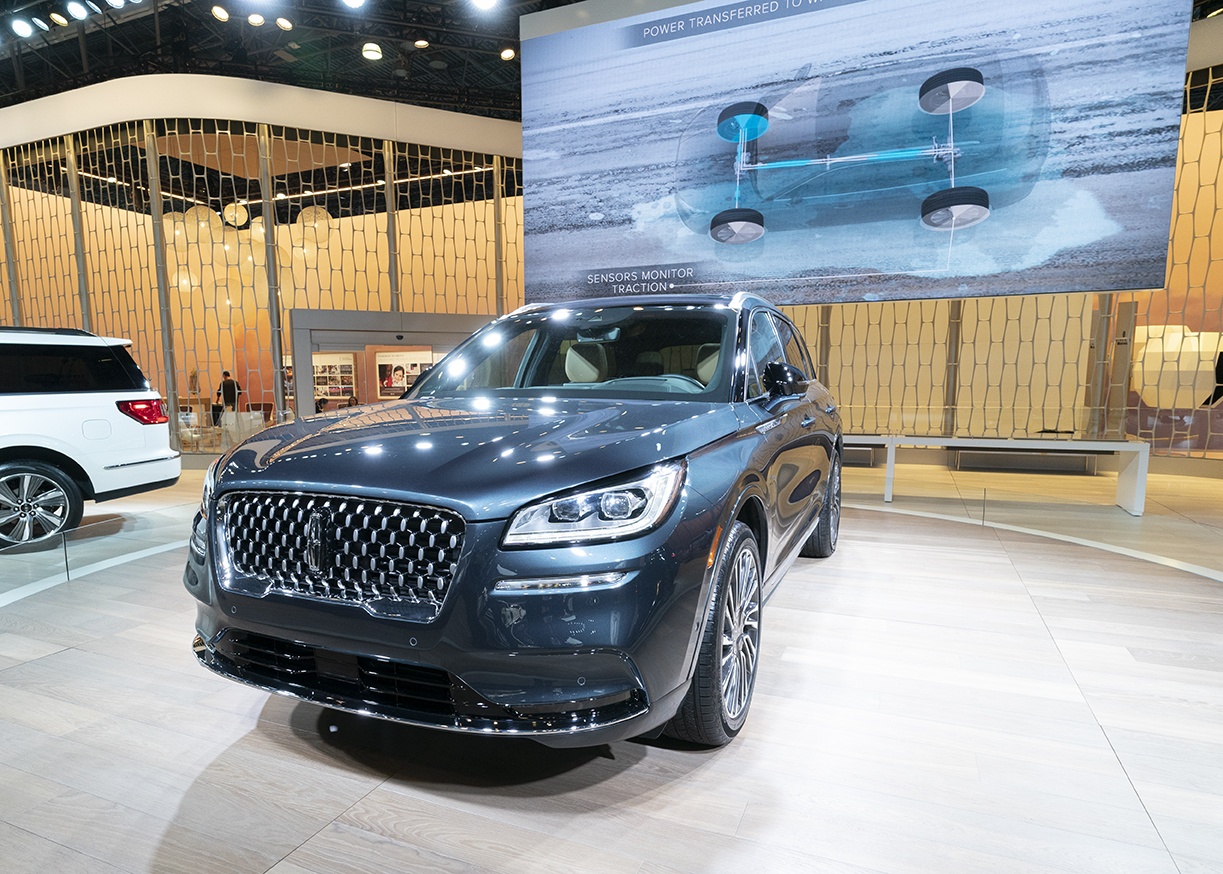 That’s Caddy, but what about Lincoln?

Introducing the Corsair, compact SUV. The name “Corsair” marks an important milestone in American automotive history. For decades, no one would have dreamed of naming a car anything that sounded like “Corvair” after the disastrous compact back in the 60s. But, the name makers at Lincoln decided to badge their compact SUV in honor of both a pirate ship and a WWII fighter plane.

The Corsair designers make it clear that this is a new ride from the ground up. It may employ the same basic build as the 2020 Ford Escape, but the two vehicles do not share even a single piece of sheet metal.

The unique design features a sloping roofline, along with a sharply-angled tailgate/rear window combination. The metal on the doors is deeply scooped, creating a sculpted look.

Lincoln went miles to ensure the unique drive and sound of the Corsair. The sound-deadening wall between the cabin and engine consists of separate metal pieces with an air gap between that insulates against both engine and road din.

Is the new Corsair important to Lincoln?

Consider this. Eighteen months ago Lincoln introduced the Navigator. That large SUV is a hit. Expectations are high for the Aviator. A strong performance on the bottom line by the Corsair and Ford’s luxury brand has its most impressive lineup in history.

Public perception of Ford is lower than at almost any time in its history. Everyone is saying, “they are abandoning cars.” Whether that is true or not, they can use some help from an unexpected source. Namely, Lincoln. The Corsair’s performance at the New York Auto Show can start the process.