Lincoln Goes All Out to Appeal to Car Buyers

In what many, including your favorite automotive news magazine, see as a last-ditch effort for relevance, Lincoln is announcing a new focus. As an effort to change the company image, the luxury automaker plans to reduce sales to livery (rental car, company fleet car, that kind of thing) outfits and focus on the single purchaser. In a companion move, Lincoln is sweetening the lease pot for those who prefer to purchase their cars in that manner. Gildshire was intrigued by the step and went after more information. CNet’s Roadshow helped with the research.

First some history. Forever it seems, Lincoln was circling the drain. It didn’t feel like a relevant brand because it didn’t produce products that people got excited about. To keep itself afloat, it focused on what had been a reliable source of income in the past. Namely, fleet sales. Here is the problem, though. As soon as customers see your cars as rental lot rides, your destiny is set. You’re a rental car model. Then you’re building cars to appease them, rather than the average US buyer. Rinse and repeat.

In recognition of these facts, Lincoln is cutting back on the livery, hoping to maximize a livelier segment. Since Millennials are the fastest-growing segment of the car-buying set, Lincoln is changing for them. This change takes place in the financing office. 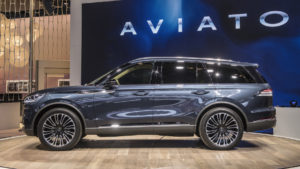 The Lincoln Aviator was a popular draw at the New York Auto Show.

Where Baby Boomers bought cars on a 5-6 year plan, with the payments reflecting that. Millennials eschew long terms. Preferring to lease, Millennials seek the lowest-cost, but most flexible leases available. Lincoln is offering their most-attractive lease rates on their most-attractive vehicles. That means the Nautilus and the new Aviator, which just debuted in New York at the International Auto Show, attended by Gildshire. We were impressed and saw impressed Millennials there, as well.

Will this course change increase the relevance factor for Lincoln? Your favorite automotive news magazine thinks it might, and Lincoln is counting on it. The grand old nameplate needs a good refreshing. It has tried before but this just might be it.