Home » Our World » Are Loud Pipes Laws Coming to the U.S.?

This week, the installation of so-called “noise cameras” in Great Britain made news, as complaints about loud motorcycles have become as loud as the bikes themselves. The debate over bikes and sound is a raging one on this side of the pond, as well. So, Gildshire enlisted the help of Britain-based Motorcycle News to ascertain the truth. Are loud pipes laws coming on both sides of the Atlantic?

This has been a motorcycling assumption for years, and it makes some sense, at least at first. Who hasn’t been startled into attention by the racket of a loud bike traveling nearby? But is there more to the matter?

As it turns out, yes.

Motorcycle exhaust is rear-facing. (We get it that you knew that.) That means the noise is facing the rear, as well. The faster the bike is moving, the less noise is audible from the front, because but you’re traveling further from the zone of sound as you advance down the road.

The folks in England who are behind the movement away from loud pipes are gaining traction (no pun intended). They agree that a loud exhaust pipe could come in handy when splitting the lanes at low speed. In other words, letting the drivers in front of you know that something is approaching. But, since 77% of bike accidents are from contact to the front or rear, loud pipes are of little to no use for accident avoidance. 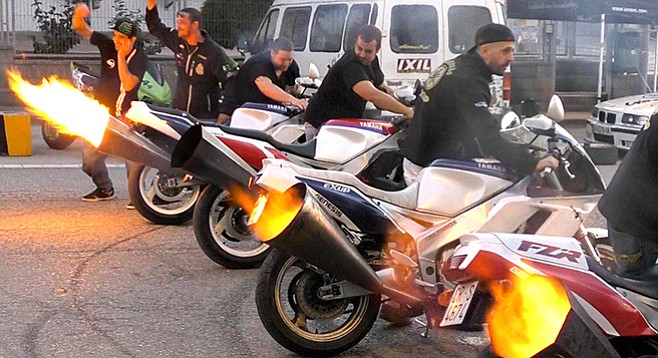 Something tells me these guys would be against loud pipes laws.

The anti-noise activists go on to say that common courtesy urges us to consider noise pollution. While a rider may believe that his bike makes beautiful music, others strongly disagree. A heavy throttle at 11PM is never a good idea.

Saying “it’s my bike and I will do what I will do” sounds tough and independent, but ownership of a bike does not include the right to beak noise regulations. It also doesn’t free us from the need to be good neighbors and good citizens of our towns and neighborhoods.

What about aftermarket exhaust kits?

Aftermarket exhaust will increase your horsepower, but buying and installing one to increase excessive noise is a bad idea, because of the factors we just stated. If more power is what you seek, only then consider aftermarket exhaust.

So there are better ideas for safety. What are they?

Learning how to ride well, and a close eye on traffic is essential to making it home safely. A better horn, wearing a brightly colored helmet and a high-visibility jacket are proven ways of keeping yourself noticed in traffic. All of these are better methods of attention-getting than a loud exhaust note.

These are the thoughts behind the move in Great Britain to restrict exhaust noise and quiet the British streets and roadways.

Is Gildshire expecting loud pipes laws in the U.S. sometime in the future?

Jurisdictions in the U.S. are carefully watching…and listening. Look for the same initiatives to be brought to bear in this country. This may be the new century’s version of aircraft noise abatement procedures that went into place in the 70s. Gildshire’s ears are to the ground on this matter.