Is a Sandwich Your Next Big Investment Strategy?

Home » Our World » Is a Sandwich Your Next Big Investment Strategy?

Remember when you fiddled around with that broken tooth? You knew you shouldn’t, but your tongue looked for the spot. Wait… wait… ah! There it is! That’s what it’s like to recall a missed opportunity. We look in the rear-view mirror at the times we had a chance to make some real bank. We calculate (with an actual calculator if we’re really obsessed) how much just a small strike (if made while the iron was hot,) would have returned. Then we spend a half hour calling ourselves shortsighted fools. Does Gildshire really have a story like this? Nah, we’re smarter than tha… The year was 1975.  We had the chance to put some money in a startup with an odd name. We passed. It was Microsoft. A hundred dollars then, without additional money later, would be $6.8 million as of today. *Sob*

Oh, well. We probably would have spent the money on fine women and fast wine, or vice versa.

Where is that next big thing? Is it, inevitably, in the tech world?  Experts say “no.” It might be hiding in plain sight and not in the tech sector at all. Everyone except the robots in the Revolution will eat lunch. Some savvy analysts suggest we invest in our midday meal.

Here are the franchises Gildshire’s favorite finance whiz kids recommend. If you believe the Subway of tomorrow is on the list, then invest in it! 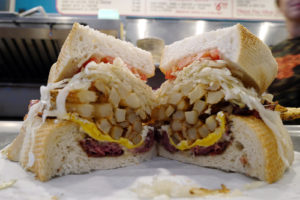 The Primanti Sandwich is known simply as “The Legend.”

Primanti Brothers: By definition, there weren’t many people with jobs during The Great Depression. Of the few folks gainfully employed, though, truck drivers were needing lunch while on the route. Meeting that need, Pittsburgher Joe Primanti decided to invent a handheld meal for the Teamsters. It’s meat (normally pork or beef, but occasionally turkey), mustard fries, cole slaw, and cheese, between two thick slices of All-American white bread. It’s pictured to the left with a slice of tomato, but the cool kids have there’s without.  What makes Primanti an investment idea? The Brothers Primanti are shipping sammies around the country…at 100 bucks a copy.

Capriotti’s: We are told of the things that make Delaware a destination, Capriotti’s Bobbie sandwich is most frequently mentioned. It’s Thanksgiving held lovingly in your hands. That means a hoagy roll surrounding roasted turkey, cranberry sauce and stuffing. What is makes Capriotti’s an investment idea? Capriotti’s isn’t just in Delaware anymore. They have over 100 locations in 16 states plus D.C.

Isn’t Portland the first place that comes to mind for a Cuban sandwich?

Bunk Sandwiches: For the oddest named establishment on the list look no further than Bunk Sandwiches. The founder of this Portland, Oregon shop was an enterprising and classically-trained chef who simply longed to start a food truck. He did and later it became Bunk Sandwiches. It became renowned for serving up the best Cuban Sandwich north and west of South Beach, along with a meatball Sando that brings tears to the eyes of Italian Mamas. What makes Bunk Sandwiches an investment idea? Right now, the franchise map shows six Portland locations, along with another one in Brooklyn. There is a lot of country between those two cities. 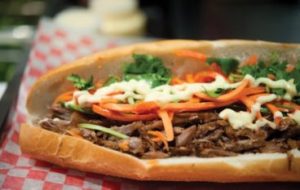 Bahn Mi, aka the official food of Toronto.

Banh Mi Boys: Canada was known for snow, beer, and national health insurance, but that was prior to the day two Toronto lads brought their famous banh mi sandwiches to the U.S. The pulled pork one includes Asian vegetables, mixed greens, and special sauce, because that combination turns it into a thing of delicious beauty. They stuff that nonsense into a soft sandwich roll and say “dig right in.” What makes Banh Mi Boys an investment idea? Number wonks who count this kind of thing tell Gildshire about search engines groaning under the strain of “banh mi” search totals.

Is your next investment flyer on our list? Don’t reflexively say “No,” because we all recall the startup with that funny name.

Herbal Medicine: Not A Pseudoscience