Macy’s Thanksgiving Day Parade is back in New York City. We hope you gave your thanks, enjoyed the parade and nice meal with your family and loved ones.

The parade was held on Thursday, November 25th, 2021, on the streets of New York. The three-hour event happens on Thanksgiving morning leaving time for families to set the table for the Turkey Day feast. Under the helium balloons across Manhattan on Thursday during Macy’s Thanksgiving Day Parade, life seems to go back to normal after more than a year and a half of life in a pandemic environment. From Herald Square, in front of Macy’s to Central Park, you could hear “Happy Thanksgiving” on every corner of every street and every avenue. There are a lot of things we should be grateful for after and during challenging times. 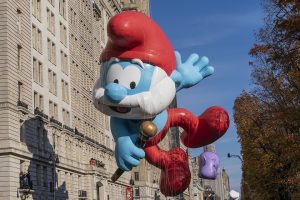 Macy’s Thanksgiving Day Parade always starts on the Upper West Side right in front of the American Museum of Natural History at 9 am.

From marching bands to children wearing turkey-shaped hats, it seems that the parade is back in the city where people experienced a great loss in the past 20 months. Still, we have to remember there are so many things we should be grateful for.

To be a part of the parade in a social environment means a lot to New Yorkers. For many, this is the first family trip after a lockdown in the city that got completely closed during the pandemic. For a city like New York to be completely closed with empty streets, it seems that just having a normal parade in the city is a great reason to be thankful. Watching the parade on TV was not an option for New Yorkers. 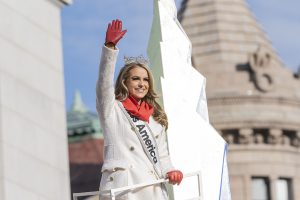 The first Macy’s Thanksgiving Day Parade was in 1924 and it has been rarely canceled. It was canceled during World War II while during the pandemic, people were not allowed to attend the parade in person. In 2021, there were 4,500 volunteers, and confetti and helium balloons filling the streets.

The experience of the Thanksgiving tradition with balloons above the Upper West Side was open to only vaccinated people, unfortunately. Many made sure to match their outfits with masks.

Hampton University Marching Force spent a lot of time practicing for the parade online. Simeon Guyton, a sophomore from Hampton said that most of his freshman year was spent remotely. Although the pandemic is not over, it was a special time for the band to spend some time together during the parade. A lot of people who live on the Upper West Side, host dozens of people for the Thanksgiving parade. However, many decided not to do that due to the ongoing pandemic. Upper West Side residents had family members over and celebrated Thanksgiving with the perfect view of the parade.

Around 100 members of the group from the Church of Jesus Christ of Latter-day Saints sat in the front row which is a tradition that’s been canceled last year. So, the tradition of Macy’s Thanksgiving is back which is one step forward to living a normal life, before the pandemic. Even tourists were there, on the streets of New York many of them were experiencing the first and maybe the last Macy’s Thanksgiving Day Parade. 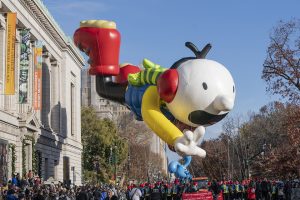 Miss America Camille Schrier attends the parade.Many celebrities were on Macy’s parade there was Miss America in a white coat and her Miss America crown. Kelly Rowland was also there during Macy’s Thanksgiving parade. Also, Santa was there and troopers from the Star Wars were marching on the streets of New York. Every year Santa is the icing of the cake on the parade, reminding us that holidays are right around the corner.Colorful characters returned, floating above the streets of New York. Macy’s parade indeed has everything you need from a parade. From Baby Yoda to Papa Smurf and Snoopy, the giant balloons were floating over the streets of Manhattan while marching bands performed below.

Quite a Different Parade This Year

This year’s parade is quite a change from the last year when the public was banned from attending the event in person and people could watch the parade from windows and on TV.

Will Coss, who is executive producer of Macy’s Thanksgiving Parade announced in September 2021 that the parade this year will be closer to its original parade. He delivered what we expect Macy’s parade to be.

“We are thrilled to welcome back in its full form the Macy’s Thanksgiving Day Parade. The world-renowned celebration ushers in the magic of being in New York City during the holiday season. We applaud Macy’s work to creatively continue this beloved tradition last year and look forward to welcoming back Parade watchers to experience it safely, live, and in-person this November.” 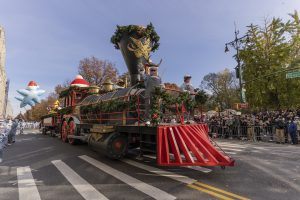 If you are not catching the Macy’s parade live in New York City, you can watch the performance and balloons live only on NBC. In case you don’t catch it live, you can watch repeat airing later in the day, usually around 2 PM on NBC. Also, local CBS stations offer live coverage.

The most important thing is to be grateful during the holidays. Sometimes little things make us happy such as a beautiful parade and time spent with our loved ones. Life in the pandemic was a great reminder that we should be grateful for what we have. Let’s not forget that.