This is the time of year when MLB’s pretenders and contenders start to reveal themselves. The season is approaching the 1/3 mark, and Spring Training’s optimism is coming true for some, and turning out to be fool’s gold for others. That was then, and this is now. Your team hasn’t lost a game yet, and your biggest rival is winless. The 2020 season hangs in the balance between safety and prudence versus “Play ball!” and “Overreaction!” Is there a plan, or just a framework? Can the owners and players agree to any of it? What about the green elephant in the room with the pictures of the Presidents across it? Gildshire wants to know the answers as much as we want to see the games under the shiny arc lights on a summer night. What are the questions that Major League Baseball’s labor and management face about reopening?

It’s more than just grabbing a ball, bat, and glove, isn’t it?

Indeed, it is. To play games without fans, Major League Baseball’s thirty teams need thousands of people. These include equipment managers, traveling secretaries, and the hordes that makeup broadcast on-air talent and support personnel. That’s just for one game, much less fifteen games every day. More workers are required to transport the teams from city to city, and house and feed them once they get there. 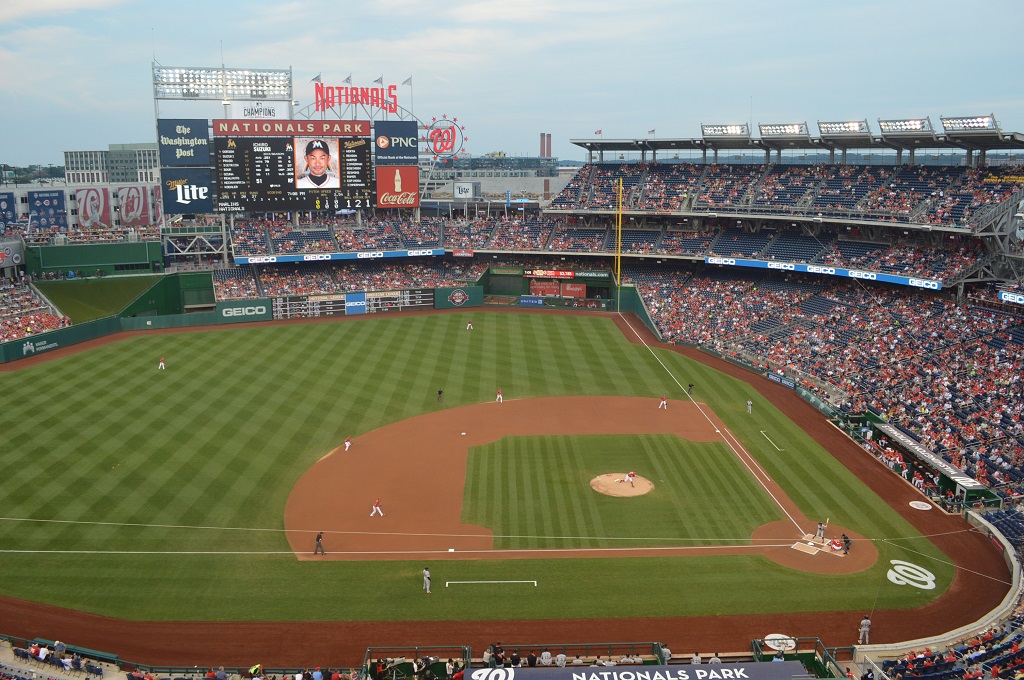 Will Major League Baseball’s Champion Washington Nationals get to raise their banner in front of their fans?

Does anyone have a plan?

The league does! It came out with a 67-page rulebook for keeping everyone safe and healthy, at least as far as is practicable. The basics are:

Coronavirus tests for the players multiple times per week, and monthly blood screens for everyone else. The players’ temperatures would be taken twice per game day. Once at home and again at the ballpark. Anyone with a body temperature of 100 degrees plus would be quarantined. The leagues’ coronavirus rulebook includes detailed diagrams showing where the players and coaches are to sit while inside the dugout. Further guidelines spell out the players’ spots for the pregame playing of the National Anthem, as well as for “God Bless America” during the seventh-inning stretch. (Though, one has to wonder if that is necessary at stadiums without actual fans.)

The umpires will toss out of the game any ball touched by multiple players. All team meetings would take place outside or by video conference. Postgame buffets (aka “the spread”) and in-game water coolers would be out, replaced by individual meals and washable or disposable water bottles. Fighting or fraternizing with opponents would be strongly discouraged, along with spitting.

Something tells me that the last one would be the hardest to enforce.

It is hard to imagine watching Buster Posey behind the plate without seeing him lift his mask to spit. But, as hard as the spitting rule would be to enforce, we haven’t even touched on the financial aspects. This is uncharted territory.

So far, the players seem amenable to a pro-rated formula for pay based on the number of games lost. But, they seem less-than-inclined to meet the owners any further than that spot. Some outspoken players, Tampa Bay pitcher Blake Snell, for example, says he won’t play for anything less than his full salary. Obviously, that is a non-starter for his employer.

The league wants the players to absorb a more substantial portion of the financial risk than straight-up pro-rata since no fans mean no parking or concession revenue. While the money the teams receive for broadcast rights is considerable, no one foresaw the owners paying salaries with those monies alone.

So, will there be baseball?

I suspect there will be, but once labor and management lock horns over money, things can get as contentious as a beanball war between the Yankees and Red Sox. Look for Major League Baseball’s labor issues to be resolved in the next couple of weeks, though. I don’t know who wants to tell baseball fans that the season has been scuttled over dollars and cents. That happened once, back in 1994, and it took a steroid-fueled home run race to bring fans back to the games.

5 Decoration Ideas for Your Bedroom