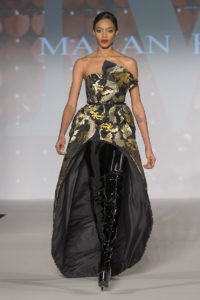 “Wherever you go, shine.” Those are the words that sit atop Malan Breton’s social media pages, and it is only appropriate that they do. They are his mantra for fashion. Mr. Breton is an alumnus of Lifetime’s Project Runway, but his light is only shimmering more brilliantly at New York Fashion Week. His show was a stunning display of high-end fashion, highlighting Breton’s emphasis on black and white, which made his occasional forays into bright reds only that much more startling. It was a great show, and Gildshire’s Lev Radin was there to get the vibe of the crowd and take some photos.

Malan Breton counts Kylie Minogue, Ariana Grande, and Scarlett Johansson among his celebrity clientele, but the next generation of stars was prominently displayed on the New York Fashion Week runway for his show. Cindy Crawford’s 16-year-old daughter Kaia Gerber walked for Breton, as did Kelsey Grammer’s daughter Mason. Young Ms. Grammer is also 16 years of age. The youth movement continued as the show was given a prelude by 17-year-old Matthew Whitaker, who played stylish jazz piano for the expectant crowd.

The crowd was not to be disappointed by the fast-paced show that followed. The models moved up and down the catwalk at a brisk pace, reminiscent of the pace that style changes. Everyone at the show knew they were seeing today and tomorrow in the fashion world, but that the day after tomorrow would herald something new and exciting. That’s fashion, and fashionistas would have it no other way. The crowd at Cipriani was abuzz, throughout. 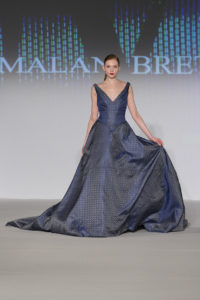 What did we learn about the coming trend?  Structured shoulders and bold and colorful suit prints are in style. One intricately detailed gown after another walked the catwalk of the designer’s Fall/Winter 2018 collection showcase. Shiny black leather skirts were next up. Some in the crowd gasped at what followed.  Leather lace-up corsets, and elaborate, show-stopping trains. Before the crowd had fully absorbed what it had just seen, Malan Breton produced a series of backless gowns and sheer body-con styles to slink down the runway. Only highlighting the severity of the styles were the hairstyles adorning the models.  Slicked-back ponytails accompanied thousand yard stares. These ladies are not trifling showpieces. They are the faces of strong and powerful women…who happen to enjoy the hottest new styles.

With impeccable Saville Row tailoring, Breton’s menswear is in high demand, as well. His classic lines, in combination with bold color combinations, make him a high-demand designer even as he is exclusive. Which leads us to Breton’s surprise for New York Fashion Week 2018.

He took a hard turn in this show, as compared to his past shows. At New York Fashion Week 2018, he followed a trail blazed by other designers, but an unusual one for him. He showed a mixed collection of menswear and womenswear at once. Usually, a separate showing the menswear line took in a broad range. Street style-approved coats, tracksuits, and zip-up jackets led to a statement-making formal orange suit. It will take a bold man to wear the orange suit, but bold is the road to innovation and success. That’s the message Malan Breton shared in this show of men’s style. 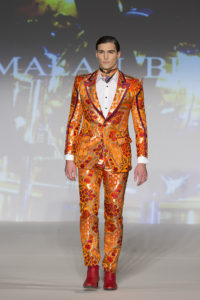 Malan Breton is not without a sense of humor. If the orange suit brings to mind a superhero, well he won’t object.

Then with the orange suit still on their collective minds, those in the crowd leaned forward in their seats as the show took yet another turn. Lovely and flowing gowns gave way to inspirations in workwear that some described as “fierce.” Structured blazers and luxury pants, then trench coats designed to keep a lady dry as she walks the streets on a spy mission.

Taipei, Taiwan-born Malan Breton’s taste runs to the international. That sensibility shows up each and every year in his collections. This, his 2018 New York Fashion Week show is certainly no exception to that rule. It was a show well-worth New York Fashion Week, as well as a show that people are talking about days after.