Hello again, movie buffs.This is your friendly neighborhood movie previewer back for another bite of the cinematic apple. There is just one more weekend left before we can call it spring! I don’t know about you, but I am more than ready. Northeasterners, awaiting another “bomb cyclone,” are ready for the season of renewal, as well. By this time, those poor souls must hate The Weather Channel. What is a bomb cyclone, anyway? Like “supermoon” it seems to have come from nowhere, circa 2015. My brothers and sisters in New England would like more of the latter, and less of the former. This weekend, March 16-18, there are four films with Rotten Tomatoes scores. “I Can Only Imagine” opens too but doesn’t have the requisite number of reviews. The good folks at R/T are all over the map this week. Shall we see if Gildshire Goes to the Movies agrees? 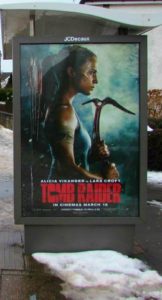 Tomb Raider, rated PG-13 for sequences of violence and action, and for some language. I have a great deal of admiration for actors willing to take on a role clearly associated with someone else. The role of Lara Croft and Angelina Jolie walk hand in hand. The original Lara Croft: Tomb Raider introduced Ms. Jolie to a wide audience, catapulting her career forward. In this one, Alicia Vikander takes on Ms. Crofts mantle. Alicia Vikander is smaller than Angelina Jolie, using speed and quickness more than power and strength. Does it work? Or, is it meh? The consensus veers toward the latter. The movie costars Dominick West, Walton Goggins, and Daniel Wu. Rotten Tomatoes 52, Gildshire 3.3

Love, Simon, rated PG-13 for thematic elements, sexual references, language, and teen partying. If the overall scoreboard of genre movies was revealed it would probably look something like this. First would be movies where things explode and men walk in slow motion away from the explosions. Second would be James Bond thrillers, shaken but not stirred. Third would be coming-of-age movies. This movie is a coming-of-age film with a message of inclusion. It also has several laugh out loud funny scenes. It stars Nick Robinso, Katherine Langford, Alexandra Shipp, and Josh Duhamel. Rotten Tomatoes 88, Gildshire 3.9.

7 Days in Entebbe, rated PG-13 for violence, some thematic material, drug use, smoking, and brief strong language. In 1976, a jetliner bound from Tel Aviv to Paris was hijacked. This is the story of the hijacking and then the aftermath. It has some timeliness to the current political climate to it, along with a story that should be told. Unfortunately, it does not appear to be a particularly well-told or interesting movie effort. That is a shame. It stars Rosamund Pike, Daniel Bruhl, Eddie Marsan, and Ben Schnetzer. Rotten Tomatoes 14, Gildshire 3.1. 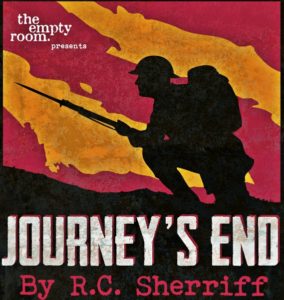 Journey’s End, rated R for some language and war images. It has been said that if not for World War II, there would be no History Channel. Indeed the war against the Axis Powers in general, and Adolph Hitler, in particular, overshadows the First Great War. That’s too bad. The Doughboys who fought face-to-face with the enemies in the trenches of Europe are heroes, as well. What do the two wars have in common with each other and every other war in history? They were horrific. This movie tells a violent, touching, tragic, heartwarming story, all at once. Not an easy task for a filmmaker. It stars Sam Claflin, Asa Butterfield, Paul Bettany and Toby Jones. This movie earns the March 16-18 Gildshire Movie of the Fortnight Award, due to its honesty and quality throughout. Rotten Tomatoes 98, Gildshire 4.6.

There you have it. The lineup for March 16-18 looks strong enough for a double feature. Mindless action, mindful growing up, violence for a cause, and violence giving birth to bravery. What better way to greet the spring flowers? We will see you again in a couple of weeks. Until then, Pace e Bene.