“The Masters.” Two words that mean but one thing to a golf enthusiast. The first weekend in April, the game’s best gather on the lush green grass at Augusta National for the most prestigious tournament in the game. Today, Gildshire (your favorite online sports magazine since our inception) looks at The Masters. Who is there and how are they selected? Who do the experts favor to win? What might the casual fan not know about this most important tournament?

There is a long list of qualifiers to be invited to The Masters, but the most important are these:

2. Winners and Top Four finishers of the most recent “other” majors qualify for this year’s Masters. (That would be the 2017 U.S. Open, British Open and PGA Championship.)

3. The Top 12 finishers in last year’s Masters receive invitations to this year’s tourney.

4. The 50 leaders on the Final Official World Golf Ranking for 2017 receive invites.

5. The 50 leaders on the Official World Golf Ranking published in the week ending March 31, 2018 receive invitations, as well. 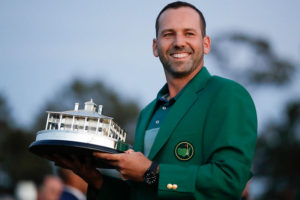 Beginning in January, offshore sportsbooks posted betting lines for The Masters. The current favorites are Tiger Woods, Rory McElroy, Dustin Johnson, and Justin Thomas. The fact that Woods is a favorite, having barely competed in the last three years, is a story unto itself.

Casual fans of the sport know all about the azaleas at Augusta, Amen Corner (holes 11-13), and the green jacket won by the winner. More golf-centric fans can probably recount some of the tournament’s historical finishes. However, here are some things most will not know about the tournament.

1. Scattered about the Augusta National course are ten cabins, available to members and guests of members. The Eisenhower cabin went up in 1953, in honor of the president and his wife. He visited it 45 times but passed away while planning his 46th trip.

2. You can’t bring your phone or a camera into the course during the tournament. Cameras are allowed during the practice rounds.

3. If you break Rule #2, then you will be led off the course by armed guards and banned from returning…ever!

4. Augusta National serves liquor, however, no booze will hit the glass on Sunday until the last local church calls the club to say that services are over.

5. The grounds on which The Masters parking lot sits used to be a neighborhood. Today, one house still stands, because the owners refused to sell.

6. The line for the gift store is long, but tourney personnel guarantees your wait will be no longer than eight minutes.

7. Unlike at most other sporting events, attendees at The Masters can enjoy a good cigar while the action is taking place.

8. Pimiento cheese sandwiches and egg salad sandwiches are The Masters’ equivalents to strawberries and cream at Wimbledon. In other words, they are the go-to foods.

9. Soft drinks have generic labels. Name brands = gauche. I have it on good authority, though, that the “cola” has a certain “red can” taste.

10. Every restroom has 3-5 people tending the facilities. As a result, the comfort stations are immaculate.

“Okay,” you say, “How do I get tickets?” Actually, there are two ways to grab a ticket to The Masters in 2019. (Well, you can’t just buy a ticket. That would be plebeian.)

On the one hand, you can enter a lottery. That’s how you apply for the opportunity to purchase tickets. So, be sure and register at masters.com.

On the other hand, you can get your hands on a tournament badge. That isn’t easy. They go to patron list members. (It’s full, by the way.) According to Augusta National, “after the death of a badge holder, the account is transferable only to a surviving spouse and cannot be transferred to other family members.”

“So, you’re telling me that cozying up to badge-holder Uncle Zeke isn’t going to work.”

Let’s tee this thing up, because your favorite online sports magazine says, “FORE!”

How Did Halo Top Take Over The Ice Cream Game?