Memorials are always controversial. When an event like a war is so tragic and traumatic that a country feels it needs to remember it, so it doesn’t happen again. It may seem like those with the money ultimately decide what a memorial will be, but the victims and families can push back and make certain demands. So can the public as a whole. In the United States, no memorial has been quite as controversial (so far) as the Vietnam Memorial Wall in Washington D.C. 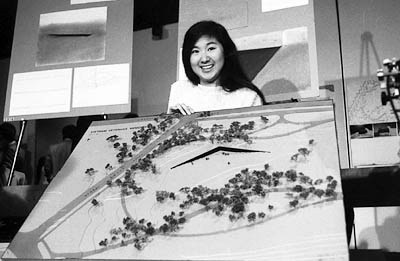 It all began with a class. In 1981, 21-year old Yale student Maya Lin received an assignment – create a funereal (pertaining to a funeral or other sad event) piece of architecture. She chose to design a memorial to the Vietnam War. Her design got her a B+, and her professor encouraged her to submit it to the national competition. It was an anonymous competition that collected over 1,400 submissions. Out of all of them, the judges chose Maya Lin’s.

While the panel had determined the design was apolitical, critics thought otherwise. The design consisted of two black slabs of reflective stone, set into a V, that sunk into the ground. Some didn’t like the black, saying it was too depressing and represented shame. While the V-shape apparently imitated the two-finger peace sign. Tom Wolfe and Peter Schlafly said it was “a tribute to Jane Fonda.” Ross Perot, supposed to give $160,000, withdrew the funds. The critics were harsh, and Judith Martin – known as Miss Manners – and architecture critic Wolf von Eckardt helped Lin navigate the social politics of the situation.

The lack of patriotic symbols in the memorial was also a big concern.

The pressure was so intense that the Commission of Fine Arts approved an addition to the memorial, even though Lin objected. Added: a 50-foot high flagpole and an 8-foot statue of three soldiers, designed by the third-place winner. They finally decided to placed the two additions away from Lin’s memorial. 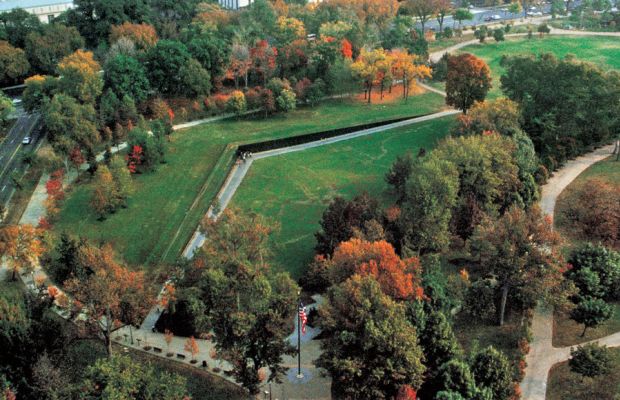 The memorial, dedicated in 1982, after thousands of Vietnam veterans marched to the site. Gorgeous reflective stone arrived from India and cut in Vermont. 58,195 words etched in stone. When it was complete, it stood 10.1-feet at the highest and tapered to 8-inches. Once built, a lot of critics changed their tune. They realized that Lin designed the memorial the way she did so it would resemble a scar, a wound that is healing. Since the memorial, Lin has designed other structures and awarded a Presidential Medal of Freedom. But the Vietnam Wall remains her most famous piece.

Currently, the Vietnam Memorial has three parts. The bronze statue, the Vietnam Women’s Memorial, and the Memorial Wall. The most famous part is undoubtedly the Wall. Free from excess decorations like flags or bold symbols of victory, the memorial fits the complicated nature of the Vietnam War itself. The names stand on their own. How they’re etched allows visitors to press a piece of paper and make a rubbing of their loved one’s name. The black surface is like a mirror, so you can see your own reflection, and feel like a part of the memorial. That connection is what defines any good memorial, and it’s what helps events that inspire memorials to never happen again.

Healthy Sleep Habits in the Time of Covid-19 Lockdown

What is the Bliss Point in Food? The Reason We Crave Sugar and Salt

How to Build Confidence and Become Trustworthy

7 Steps to Get Glowing Skin

What is Mindfulness Psychology?