The annual Detroit Auto Show is the biggest name in automobile exposition. That was the case in 1907 when the show first opened. It was, even more, the case in 1957 when international cars became a part of it. In the 61 years hence, the Detroit Show outshines all other auto shows combined in terms of prestige and importance. The glitter and gleam of the Detroit Auto Show will take a hit next year. At least it will if Mercedes-Benz follows through on its recent threat to skip the show altogether. Gildshire’s automotive ears perked up. This is what we found out. 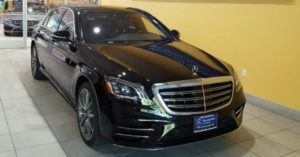 Mercedes, such as this one may not be in Detroit next year.

According to insider whispers, Mercedes is concerned about the January dates of the Detroit Auto Show as they do not coincide well with the company’s current launch plans. As a result, the German carmaker is deciding whether a trade show like Detroit fits with the cadence of their launch calendar and whether there’s a more effective format for the needs of Mercedes-Benz.

Should the rumors and whispers have legs, they would be a harsh blow. Mercedes typically has a large presence at the event. They took it to a whole new level this year with the much-anticipated launch of the new G-Class SUV. Aside from the new model, the automaker brought an original 1979 G-Class fully embedded in synthetic resin. The whole thing weighed 44 tons and was impossible to miss at the show, as it was displayed just outside Cobo Hall.

Unfortunately, Mercedes and the rumors thereof are not a new thing to auto expos. More and more car companies’ decision-makers are pulling the trigger on pulling out of car shows. Who, or what is to blame? Chances are you’re reading this on the culprit. The internet is the main reason why car companies are skipping the auto show circuit. This year alone saw Volvo, Porsche and Mazda nix the event in Detroit. Peugeot and Nissan skipped the Frankfurt Motor Show last year. Transporting vehicles and displays to events around the world can be incredibly expensive, meanwhile, the internet allows companies to reach millions of people for a fraction of the cost.

One hopes the companies and the shows can come to an agreement because there is something about lights and turning car carousels to get the juices flowing. We went to shows with our Dads and grandfathers. Now, we want to take our sons and daughters.

Vacation Places Where Cars Are Not Allowed