Metropolitan Museum of Art: A Look at the Evolution of Photography

Home » Style & Creativity » Metropolitan Museum of Art: A Look at the Evolution of Photography

As all types of art do, photography has undergone an incredible evolution in the last century. At the Metropolitan Museum of Art in New York City, A Look at the Evolution of Photography is an exhibition that showcases images from prominent photographers over the past 100 years and their varied ways of working.

Evolution of Photography: The earlier prints from 1916 to 1945

As the camera became more accessible, more artists aspired to experiment with photography and document aspects of the world they wanted to share with society. During the early 1900s, artists found themselves navigating the geopolitical and aesthetic changes that resulted from war and global modernism. Photographers traditionally took photographs that mimic the style of paintings, but in these early years, that is an aspect many wanted to change. Photography has many unique qualities and the artists of that time valued that uniqueness. Many used photography to document society, especially during the wars and the Great Depression. Dorthea Lange is one example of a photographer who used the backdrop of New York City and the people in it as her subjects.

Following World War I, photography could be categorized by sharply defined imagery that formed clean lines and cool effects. Edward Weston, a well-known photographer from this time, demonstrates that in much of his work. He preferred his images to appear detailed and clear, framed by the camera lens itself. He was not one for altering the images post-capture; he used large-format equipment and small apertures to create the focused feel he strived to achieve. In the Photography’s Last Century exhibition, there were several of Weston’s pieces on display, each demonstrating Weston’s dedication to straight-forward, focused, elemental imagery. 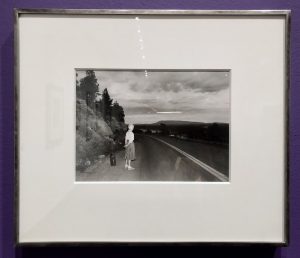 A Look at the Evolution of Photography: Cindy Sherman Untitled Film Still #48

After the wars, photography became more experimental and explorative.

After the Second World War ended and the States entered into a peaceful period, photographers felt less of a need to document the realities of society and moved on to exploring some of the intrinsic qualities of photography. Cindy Sherman used photography during this time period to highlight and critique stereotypical female roles in society in innovative ways. Her Untitled Film Stills series showcased how photographs compose a story. By focusing on a lone woman in each image, the viewer’s attention is drawn to her figure, stance, posture, surroundings, and overall context. This explorative series emphasizes photography’s evolution away from traditional portraiture and landscapes, towards a more creative medium.

Christopher Bucklow, a British artist, experimented with apertures to form Cibachrome chromogenic prints. Guest (1996) is an example of these prints, where the viewer sees a luminous silhouette. Punching tiny holes (apertures) into a cardboard box, and taking a picture of the sun through the box, this image was formed. As the sun’s rays came through the holes, the camera captured this brilliant light in the form he desired. 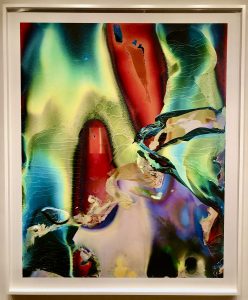 A Look at the Evolution of Photography: Daisuke Yokota’s piece, Untitled (2015)

Evolution of Photography: The later prints from 2000-2018

As technology evolves, the creative work of artist’s does, too. The evolution of photography has led us to this point in the early 2000s where everyone has a camera, but not everyone explores the capabilities of photography that true photographers do. For example, Daisuke Yokota’s piece, Untitled (2015), emphasizes the textures, colors, and movement of the object, rather than the actual object itself. Yokota is an artist who views his art as a performance practice where he physically explores the realm of photography not solely through the lens of a camera, but through abstract visual music.

Can the Keto Diet Balance Hormones?