Camp: Notes on Fashion at the Metropolitan Museum of Art in New York City

Camp is a word that has many different meanings. The Metropolitan Museum of Art’s exhibition, Camp: Notes on Fashion, aims to explore the evolution of camp as it refers to aesthetics, specifically how it began from a place of marginality and has become an important influence on mainstream culture. Curator Andrew Bolton used Susan Sontag’s 1964 essay “Notes on ‘Camp'” to create a framework for the exhibition, which examines how the elements of exaggeration, irony, humor, pastiche, artifice, theatricality, and parody are expressed in fashion. 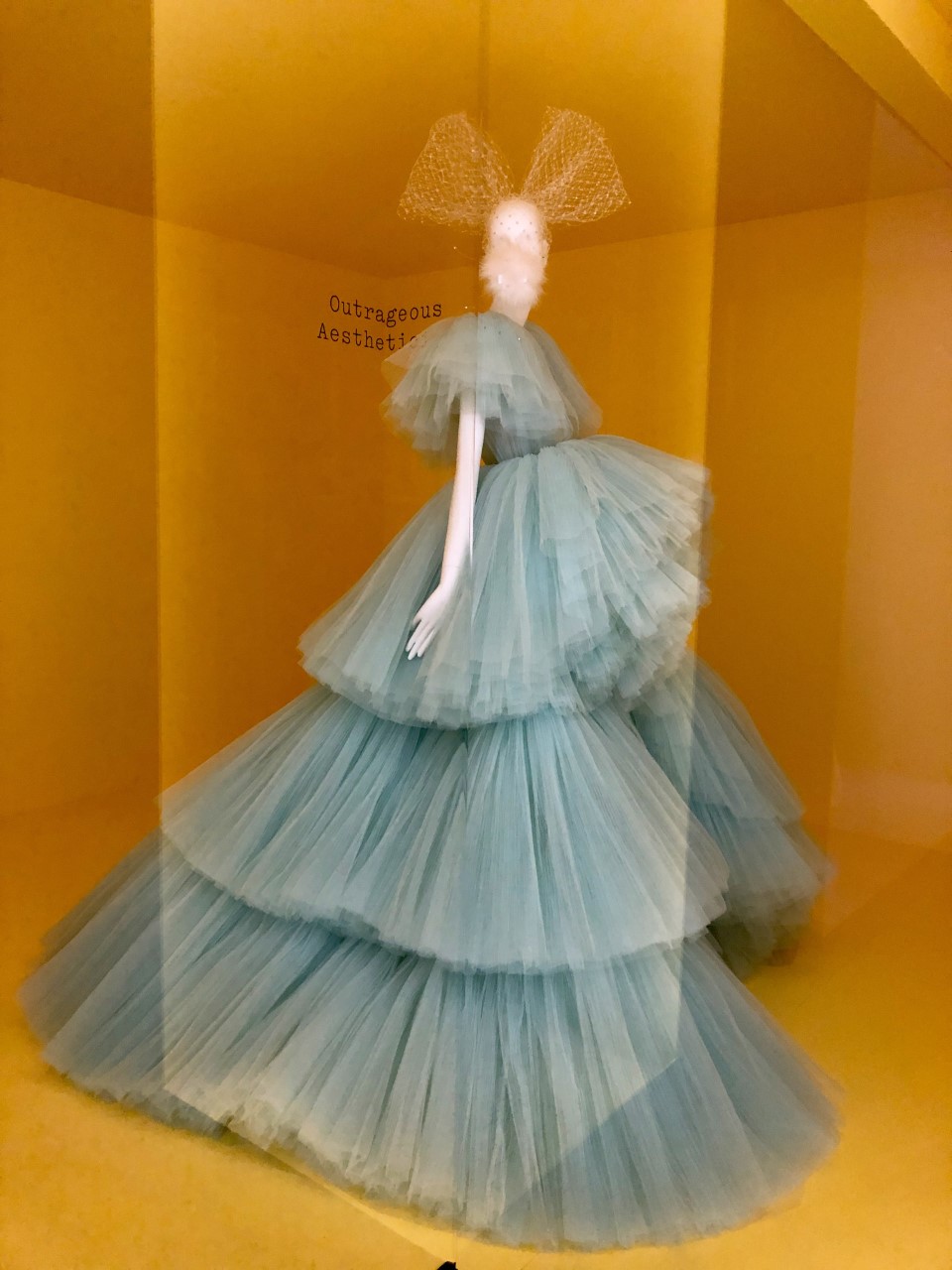 In the gallery space, the first half looks at different heroes and heroines of camp. A sculpture, Belvedere Antonius (1630), is the first piece seen when entering the exhibit. Antonius is said to have been Hadirans lover and has been embraced by queer culture. Antonius represents the “beau ideal”, a concept stemming from the early nineteenth century describing the perfect model of male beauty. Along with the sculpture, a pair of leggings designed by Vivienne Westwood, a British designer, is on display. They are from her 1988-1992 collection “Britain Must Go Pagan” and references Hellenistic antiquity, classical sculpture, and Victorian modesty from the fig lead decal on the crotch of the leggings.

The word camp first appeared in the era of Louis XIV as a verb. It was said in with references to performativity and theatricality in order to deceive someone; “Camp about on one leg. Put your hand on your hip. Wear a furious look. Strut about like a drama king.” Louis XIV is alluded to as the drama king in this statement. Along with his brother, known as “Monsuier” who was an avid crossdresser, the two brothers created a retroactive reputation for Versailles as “camp Eden.”

During the nineteenth century, the word camp became associated with distinct homosexual connotations. Frederick “Fanny” Park and Ernest “Stella” Boulton became famous heroines of the queer community after being acquitted of charges against them for conspiracy of seducing men while dressed as women. Franny and Stella used camp as an adjective frequently, as evidence in several letters that have been preserved. 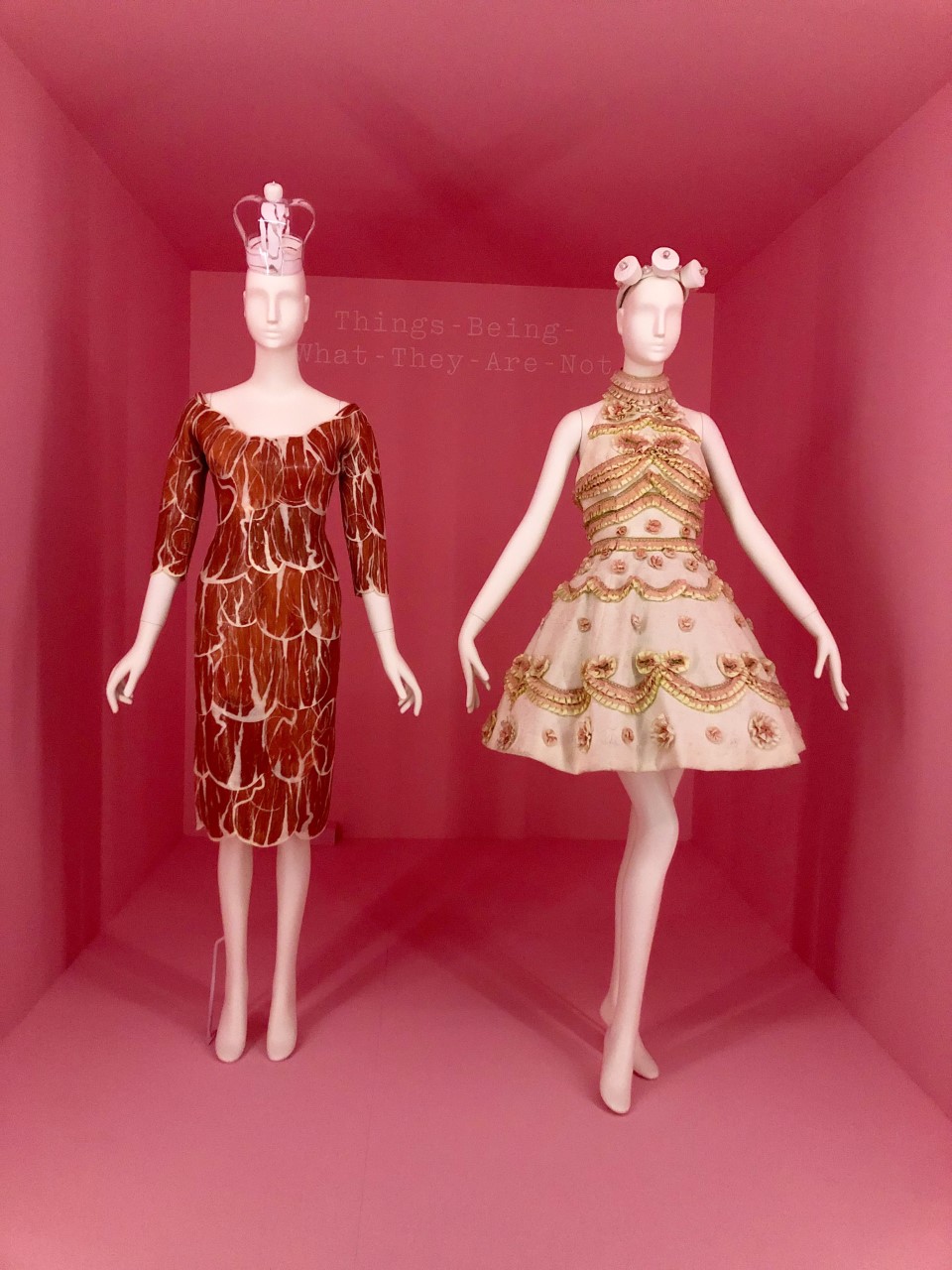 The Metropolitan Museum of Art’s exhibition, Camp: Notes on Fashion – Things being what they are not (Photo: Ceara Rossetti)

Entering the late 1800’s brought Oscar Wilde as the camp hero. Wilde was considered a “dandy” and became a vehicle of camp as a noun. His appearance gave rise to a myriad of caricatures depicting vanity, effeminacy, and superficiality. In 1895, Wilde was imprisoned for two years due to the father of his young lover accusing him of being a “sodomite.” His sentencing and apparent martyrdom gave context to an intersection of a camp and a homosexual in a public personage.

Sontagian camp refers to Susan Sontag’s exploration of camp. She was the first to view camp as a serious subject and wrote 58 notes to catalog her analysis, published in the Fall 1964 issue of Partisan Review. Sontag aimed to capture the aesthetic essence of camp, which she described as the “sensibility of an era.” Sontag viewed the origin of camp as the late seventeenth and eighteenth centuries and felt that the 1960s brought upon an “unmistakably modern” sensibility of the challenges brought to intellectual establishments by popular culture. Ultimately, Sontag presented camp as an aesthetic that promoted “the equivalence of all objects.”

The second half of exhibition is referred to as Camp Eye. Here, there is a focus on fashion statements representing different aspects of camp. For instance, camp is a second childhood, is composed of outrageous aesthetics, things being what they are not, a manifestation rather than taste, and so many more. Camp is always changing, like so much of the fashion industry. Camp also has different perceptions and definitions to different people, but it boils down to many of the things that Sontag discusses and Bolton put on display.

Part of the fun of this exhibition is that it leaves you still not fully knowing what exactly camp is. It is a concept that needs to be related to, not explained. The exhibition itself displays so many examples and ideas of camp, but ultimately it is up to the viewer to decide what camp means to them. Camp: Notes on Fashion will be open until September 8th, 2019 so there is still time left to visit the Metropolitan Museum of Art and see the exhibition for yourself.