Sing with me! “Buy me some peanuts and Crack-er-Jack, I don’t …” Wait, wait, wait! Hold on there! Two things! First, that wasn’t a typo, because the snack food really is Cracker JACK and not the plural Cracker JACKS. Second, why would you buy peanuts and Cracker Jack when Cracker Jack already has peanuts in it? That’s silly. It would be like asking for apple pie ala mode and saying, “Could I get some ice cream with that.” Boy, am I glad I showed up today because you’re caught in a baseball food rut. Gildshire has your back, as well as your tummy. We’re not just the latest sports news articles. Any online sports magazine can do that. No, we’re going on a ballpark tour today. We’re going to find the best (or at least most unique) ballpark foods offered at MLB venues around the country. Grab your napkin! 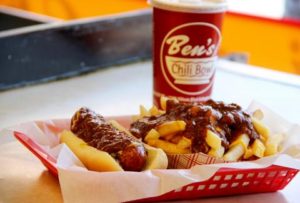 National League East: Winner, Ben’s Chili Bowl Chili Half-Smoke Dog, Nationals Park, Washington Nationals: There is something vaguely patriotic about going to a baseball game. Maybe its the National Anthem, or the realization that this is America’s game (If you ignore that whole British Rounders thingy.) What could be more patriotic than noshing on a chili dog (or chili-covered fries) named after this country’s original dog? Ben’s (Franklin, in case you were wondering) Chili Bowl has three locations inside the park, but the smell wafts over many more than three sections. Just the right blend of smoke and flavor makes this an item from which I pledge to never declare independence. Wild Card Contender: Cheesesteak, Citizen’s Bank Park, Philadelphia. 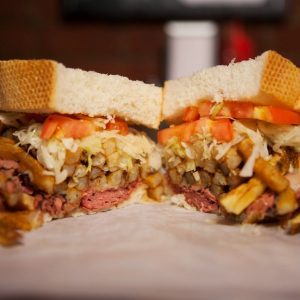 A meal in your hand.

National League Central: Winner, Primanti Brothers Pitts-Burger, PNC Park, Pittsburgh Pirates: First, a little history with your hunger pangs. The Primanti Sandwich was the original working man’s meal. It was designed as a meal that a truck driver could hold in his hands while headin’ on down the road, Jack! The baseball shrine in which the Pirates play has perfected the dish. It’s bread, fries, coleslaw, and meat. If you want to be absolutely historically accurate, choose roast beef for your meat. Turkey and pork also available. Wild Card Contender: Bao to the Pork, Wrigley Field, Chicago. 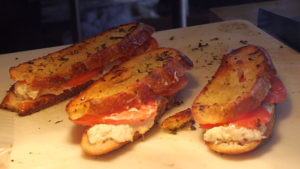 AT&T crowds never get crabby with this on the menu.

National League West: Winner, Crazy Crab’z Crab Sandwich, AT&T Park, San Francisco Giants: America’s best MLB ballpark has more diverse food choices than any other stadium in the country. Dog, burger, or pizza? For sure, but a fresh salad out of the park’s own garden is an option, as well. First-timers or one-timers, though, should really have a crab sandwich from Crazy Crab’z over the centerfield wall. It’s fresh crabmeat stuffed between two slices of buttered, authentic San Francisco sourdough bread. One of these and you’ll sing “I Left My Heart in San Francisco” right along with Tony Bennett. Wild Card Contender: Churro Dog, Chase Field, Arizona. 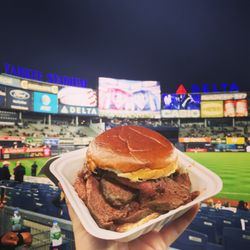 American League East: Lobel’s Steak Sandwich, Yankee Stadium, New York Yankees: Rancher Nathan Lobel grew beeves on his ranch in Austria beginning on the 1840s. His son Morris emigrated to the United States in 1911, where he opened a butcher shop carving the kind of meat he remembered from his Mama’s kitchen table. Today, Lobel’s is still an iconic Upper East Side meat-cutter’s place, but it is also a steakhouse inside Yankee Stadium. Thick cut steaks in a steaming bun. It doesn’t get any more basic. It also doesn’t get any tastier in the Five Boroughs. Wild Card Contender: Chesapeake Fries, Oriole Park at Camden Yards, Baltimore. 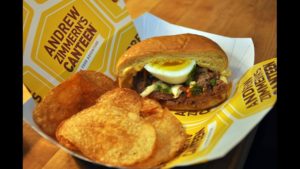 A Sloppy Ko from Target Field.

American League Central: Andrew Zimmern’s Canteen Sloppy Ko Sandwich, Target Field, Minnesota Twins:  Rhetorically speaking, how can you go wrong with a Korean-style BBQ sandwich served with kimchi, daikon, and a soft-boiled egg? That was rhetorical because of course, you cannot. Before you disregard this suggestion because of the kimchi, know that this is a kind of “Americanized” kimchi. It’s crunchy and with a hint of sweetness. The whole thing is served hot dog style on a potato bun.  Wild Card Contender: Parmageddon Grilled Cheese, Progressive Field, Cleveland. 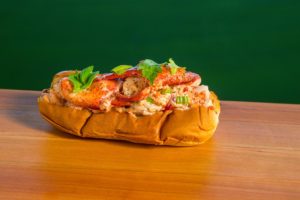 Some would say that Major League Baseball (MLB to its fans) must take a back seat to football as America’s pastime. An arguable position, for sure. But, no sport lends itself to eating like baseball lends itself to eating. For that reason, The Grand Old Game holds its own against its oblong balled counterpart. Because American’s love to eat almost as much as they love their sports. That makes baseball a twofer, and we love a good twofer. Play ball, friends, and eat up!