Sir William Molesworth threw a garden party, and showed off his new plant. Everyone gawked at the strange specimen, which had thick, stiff leaves with a sharp point. One of the friends commented that the tree would “puzzle a monkey.” After that, the tree became known as the “monkey puzzle tree.”

The official name is Araucaria aracana, and it originally came from Chile. It was discovered by Europeans when a British Navy surgeon and plant collector traveled to the country in 1795. The governor served him a meal, including a dessert made from seeds of the tree. The surgeon, Menzies, saved some and took them back to England. He planted five young trees in the Royal Botanic Garden, and soon everyone wanted the unusual plant. Only the rich could afford them, however, and so displayed them as symbols of their wealth. You can now find monkey puzzles all over Europe and the United States. 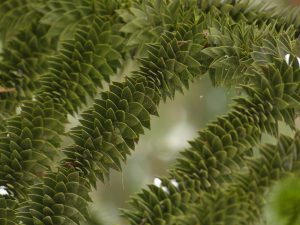 The monkey puzzle tree is ancient, and was probably around when dinosaurs roamed the earth. The leaves overlap each other, covering the branches, and even look a bit like a dinosaur’s scales. The trees you see today are all young, with branches all over their trunks. When the trees mature, these bottom leaves fall off, leaving most of the straight trunk, which can grow up to 130 feet, bare. The monkey puzzle tree can live for hundreds of years, maybe even thousands. Because it’s existed for so long, it’s categorized as a “living fossil.”

While Dr. Menzies simply saved his seeds for germination, eating them is extremely common in Chile and South America. Monkey puzzle trees take two years to produce a cone, which is the size of a coconut. Each cone can hold 100-200 seeds, which resemble almonds. The seeds can be eaten raw, boiled, or roasted. They’re also ground into flour. One of the most interesting uses is as an alcoholic brew. Called mudai, the Mapuche culture makes the drink by boiling the seeds. They wait for the seeds to ferment on their own, or they chew the seeds and spit them into a pot. Saliva enzymes speed up the fermentation process. The drink is consumed as part of a harvest ritual and giving thanks. 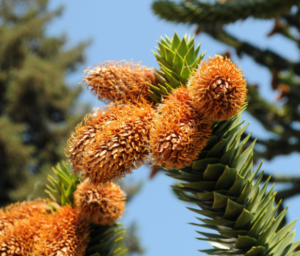 The monkey puzzle tree is the national tree of Chile as well as a national monument, making it the only plant with that distinction. However, it’s also endangered. The delicious seeds might be part of the problem. When European settlers moved into South America, they brought a whole bunch of livestock like cattle, goats, sheep, and pigs. They also brought in animals to hunt, including wild boar and red deer. All of those species loved the monkey puzzle seeds, and ate so many that none had the chance to germinate and produce new trees.

Other problems plague the tree, such as deforestation and man-made fires. While it’s now illegal to cut down monkey puzzles in the wild, people still do it. The monkey puzzle has a very slow growth process, so they aren’t able to recover from big population losses. To survive, they need time and protection, or they will go the way of the dinosaurs.

Many of the monkey puzzle forests are in danger of disappearing, which would be a tragic loss. Here are more beautiful forests that need protecting.

Amelia Simmons: The Mother Of Cookbooks