Hello again, movie fans and a special shout-out to the Moms in the crowd on this, Mother’s Day weekend. As a woman, you can do everything a man can do backward and in heels, per Ginger Rogers. As a Mom, you can do everything a woman can do and give “that look” to a misbehaving child. We salute you, Mom, not only because you deserve it. But also because we know the business end of “that look,” from Mom while she sang in the church choir. It’s chilling to recall. In the Mother’s Day weekend edition of Gildshire Goes to the Movies, we want to focus on Mom’s side of things. Our ratings are derived from opinions we heard from our favorite Mom. You may find that Mom is a tougher critic than the guy who normally writes these things. 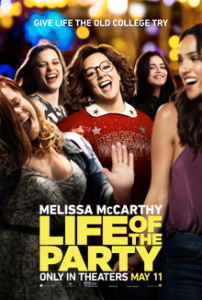 Life of the Party, Rated PG-13 for sexual material, drug content and partying: We remember Rodney Dangerfield when he went Back to School.” This movie is an homage. A homemaker returns to college after being dumped by her long-time husband. It stars Melissa McCarthy, Gillian Jacobs, Maya Rudolph, and Julie Bowen.  Rotten Tomatoes gives it a 28, but Mom says, “Life of the Party looked fun to me, but what do I know, I like stupid. Lol. 3.8″

Breaking In, Rated PG-13 for violence, menace, bloody images, sexual references, and brief strong language: Women and children in peril is a genre unto its own. Some like the tension, while others can’t get beyond the “children in peril” part.  In this, a Mom goes to great lengths protecting her children from burglars bent on no good. It stars Gabrielle Union, Billy Burke, Richard Cabral, and Levi Meaden. Rotten Tomatoes gives it a 35, but Mom says, “If you enjoyed that kind of movie you would rate it higher. I just don’t like that kind of movie. 1.6″

Revenge, Rated R for strong bloody gruesome violence, a rape, sexuality, graphic nudity, drug use and language: A couple of generations ago Charles Bronson exacted revenge for damage done to his loved ones. Fast forward to now, and our heightened tolerance for bloody combat.  Then, combine it with a healthy dose of #metoo and we get this film. A young lady is badly mistreated. Using all the firepower at her disposal, she makes sure the same thing will never happen again…to anyone. It stars Matilda Anna Ingrid Lutz, Kevin Jannsens, Victor Colombe, and Guillaume Bouchède. Rotten Tomatoes gives it an 89, but Mom says, ” It is definitely a movie about a young woman exacting revenge, as the title says.  It isn’t for me, but there are a lot of people (my eldest daughter being one) who will like the woman kicking-ass aspect. 2.0 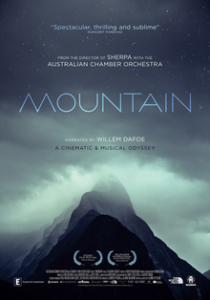 Mountain, Not Rated: Adrenaline is apparently the order of Mother’s Day weekend because of two straight high-action thrillers followed by this about people putting their bodies in extreme jeopardy tackling the highest mountains in Creation. The score is a co-star because soaring music accompanies the scenery and the death-defying action. Willem Dafoe narrates. Rotten Tomatoes gives it a 90, but Mom says  “It looks like it is very well done, but I don’t know if I would go to the theater to see it. It looks gorgeous…beautiful. High rankings for cinematography and music score. Maybe a 3.5.”

Beast, Rated R for disturbing violent content, language, and some sexuality: Wow, what a week for Mom to be put in the Seat of Decision.  In “Beast,” a young lady falls for a man with a troubled, if not checkered, past. Does he also have a criminally violent side? It stars Jessie Buckley, Johnny Flynn, Geraldine James, and Charlie Palmer Rothwell. Rotten Tomatoes 91, but Mom says, “It attracts me and repels me in equal measure, though it has the makings of a good psychological thriller. 3.7.

It was a tough week of movies. But, she perused all that opens Mother’s Day Weekend. Our guest critic reluctantly gave “Life of the Party” the Gildshire Movie of the Fortnight Award. Enjoy the flicks, and the Flicks and we’ll see you in a couple of weeks. Oh, Mom says you have a little popcorn butter on your chin. There, you got it.