As one of your favorite online travel magazines, let’s make some travel facts clear. Gildshire loves every state in the Union. We prove that with our wide-ranging travel articles. We prove that with exciting books like The Greatest Road Trip Ever Taken. Our journeys take us from seascapes to high desert plains. We love the head rush that is New York City’s Times Square, but we love the cicada-laden quiet of Manteo North Carolina just as well. We crave the sound of the ocean off of Malibu when we sleep, but we cherish the utter silence that accompanied our prairie slumber in rural Missouri. When asked to choose a favorite, we can’t. When asked to find a fatal flaw, we can’t. All that said, there is something about mountain towns…

Naturalist and environmental essayist John Muir once said, “The mountains are calling and I must go.” We get John Muir because the hills beckon to us, as well. Enjoy our descriptions and plan to visit one of your family’s favorite mountain towns this summer. Today, we explore some of the country’s best.

Taos, New Mexico, Population 5,763: Welcome to Spain, circa 1615! That only makes sense, because that was the year that Spain took over this part of what would later become the United States. Charming pueblos line the streets, but even the business section architecture has a distinct Spanish influence. Overseeing the loveliness is Wheeler Peak, elevation 13,064 feet. Taos itself sits 6,969 feet above sea level. 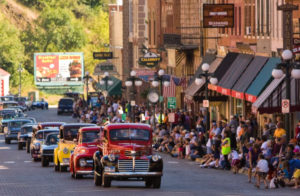 Small mountain towns are big on car rallies. Just one reason we love them!

Deadwood, South Dakota, Population 1,264: The Great Black Hills Gold Rush of 1874 didn’t start in Rapid City. It started right here in Deadwood! Though they won’t find gold nuggets in the streets, tourists today visit the town for its abundance of lakes, trails, and the Black Hills National Forest. Interested history buffs, though, will find plenty of Gold Rush memorabilia in Deadwood’s Old Town. The town sits at an elevation of 4,531 feet.

Lake Placid, New York, Population 2,438: The people who select the sites for the Olympic Winter Games are no dummies. Twice, they selected this lovely hamlet in the shadow of the Adirondack Mountains. Mountain climbers, skiers, and ice skating enthusiasts still come. They enjoy the surrounding beauty and ski the slopes that Ingemar Stenmark skied on his way to Olympic gold in the 1980 Games. Lake Placid was the site of the Miracle on Ice when a young and overmatched U.S. Olympic Hockey team beat the Russians. It rests at 1,801 feet above sea level.

Snowmass, Colorado, Population 2,900: Nearby Aspen may be more famous, but winter sports enthusiasts in the know prefer Snowmass. Indeed, for good reason. The crowds are smaller, and the prices are less dear, but the clean air and vistas are just as abundant. Winter Wonderland thrills here range from gentle, family-friendly ski runs to gondolas up the rugged mountain slopes challenging experienced skiers. Snowmass stands a towering 8, 209 feet above sea level.

Livingston, Montana, Population 7,401: When the stars of stage and screen start to call a certain mountain town home, you know that the word is going to be out soon. That’s why you should get to Livingston before the Hollywood glitterati follows Peter Fonda and Margot Kidder here. What draws them, as well as hundreds of others on a summer excursion? The Yellowstone River and Sacajawea Park are just two of many charming features in this town. Livingston resides 4,501 feet above sea level. 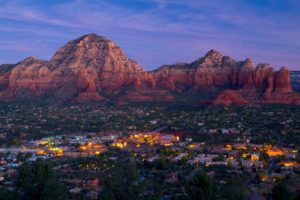 Sedona, Arizona, Population 10,397: The largest town on our list, but it is amazing it isn’t larger! Let’s set the scene together. Each evening, the setting sun lights the ruddy sandstone formations, charging the drama-filled natural tableau into a spectacular fiery glow. Not just some, or most, nights! This happens every night! It is no wonder that artist colonies call this place home and workspace alike. Do you want to see the terrain at its very closest? Venture on out to Bell Rock or to the more imposing Cathedral Rock, which stands at 4,957 feet above sea level. Sedona itself has an elevation of 4,326 feet.

Stowe, Vermont, Population 4,314: At just under 1,000 feet in elevation, Stowe is the least mountain-y town of the mountain towns on our list. The folks with ski racks on their SUV who flock here every winter would differ with that characterization. This lovely little town nestles in the valley beneath Mount Mansfield, which is the high point in the state at 4,393 feet. Skiing is big here, but so are cultural activities, dining, and the colorful crafts at the balloon festival, held annually in the summer.

That’s favorite online travel magazines stuff, but the mountain lovers among you have your own. Choose one for your family’s summer journey. Breathe the crisp, fresh air and come home rejuvenated. John Muir said it would work exactly like that, and so it does.