Did you know that buying a whole chicken is cheaper than buying the individual parts? Even when you buy organic and pasture-raised, you get a lot of meat for your money. You also get bones that you can use to make delicious, nutritious stock. Once you have your bird, what next? Breaking down chicken isn’t too difficult and it’s something every home cook should know.

A whole bird consists of a few parts which can be divided into different cuts. They are:

The breast – This part is white meat. The tenderloin and tenders (which are different) are part of the breast.

The thigh – Part of the chicken leg.

The drumstick – Another part of the leg.

The wing – Made of a few segments, the wing can be divided into a drumette and what’s known as a “wing portion.”

You have an idea about the different parts, but how do you cut them up? First, you’ll need a sharp knife. A dull knife is dangerous. Tutorials will often ask for additional tools like kitchen shears, but it’s possible to get away with just one good knife. Be sure you’re cutting on a solid, steady surface.

With your fingers, find the joints. You’ll find them where the thigh meets the body, where the wing meets the body. In the thigh, there’s another joint between the leg. There are two joints in the wing, as well. For now, we’re paying attention to the major joints.

To get the leg and thigh off in a single piece, cut through the skin and flesh connecting them to the bird. Pull the leg away to pop out the joint. Cut through the rest of the flesh to separate the leg from the bird. Repeat with the other leg.

To cut the wing, feel for a ridge, which is the joint. Cut through where it joins the body. Bend the wing to separate the joint, and then cut off the bird. 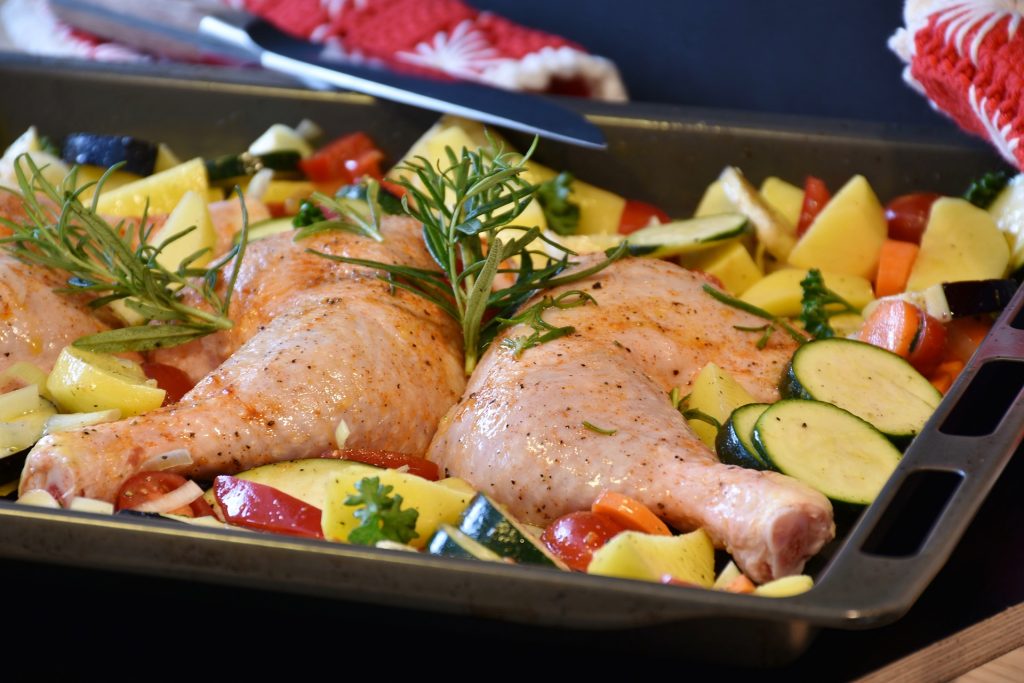 Drumsticks in a sheet pan dinner

To get the breast meat, cut across the chicken at the point where the lower back and breast separate. There’s a fat line there to help guide you. You’ll be cutting through rib bones and a joint, but it shouldn’t be difficult. To get the breast into two pieces, press down on the skin side. Listen for a crack – you’ve broken the breast bone. Turn it over to the flesh side and take out the bone and the little bit of gristle. Lastly, cut the back meat into two pieces.

If you’re a visual person, Melissa Clark from The New York Times has a great video demonstrating how to make these cuts.

Have a whole chicken laying around, but don’t want to cut into it? You can cook whole chickens! Roasting is probably the easiest and most delicious method. Preheat your oven to 450-degrees. Before you do anything else, you’ll want to check the cavity of the chicken for the giblets. Giblets are the neck, gizzard, heart, and liver of the chicken. They’re usually in a little pouch. You can keep these for stock.

With the giblets gone, season the inside and outside of the bird. Salt and pepper are really all that’s necessary, but you can experiment if you want. Tie the drumsticks together with kitchen twine. Simply cross one of the chicken’s legs over the other. Trussing helps the bird cook evenly. Put the bird in a roasting pan or big oven-proof skillet and roast. Start checking the temperature after 45 minutes. Poultry needs to be 165-degrees, so once the bird reads 160-degrees, you can probably take it out. During the resting period, which is 15 minutes or so, the bird should finish cooking.

Breaking down chicken is an excellent way to practice your knife skills. What else do you need to know about knife cuts and knives?

Desserts Made with Alcohol: A Match Made in Heaven