Nature is always surprising us. Every day, scientists are learning new things about the creatures we know exist, while also discovering new ones. However, there are a few animals that are unlikely to be real, despite our fascination with them.

The first account of a horse with one horn comes from a Greek doctor named Ctesias. In the 4th century B.C.m he was traveling through Persia and collected stories about this strange creature, which had a white body, blue eyes, and a red head. His drawings also showed that the horn was multiple colors. Marco Polo claimed to have seen a unicorn, as did Genghis Khan, who was so charmed and troubled by the intimidating creature, he decided against invading India. In the Middle Ages, people were obsessed with the unicorn, and said that the only way to catch was to have a virgin go with you. Unable to resist the girl’s innocence, the wild animal would instantly be tamed and lay in its head in her lap. It’s likely that the unicorn was actually an Indian rhino, an Arabian oryx, or an extinct type of ox.

The ocean is full of terrifying creatures, so it’s no wonder that sailors from the past saw monsters wherever they went. If you look at old maps, you’ll see elaborate illustrations done by cartographers in an attempt to be “scientific.” There was a belief that every land animal had a marine equivalent, so the creatures frequently look like versions of lions, dogs, horses, and so on. The most famous sea monster – the kraken – first appears in Scandinavian mythology as a 1-mile long squid that attacks ships. The kraken is also given a scientific name (Microcosmus marinus) in an 18th-century botany book. Given what we know now, it’s likely the kraken is based on the giant squid, though it never surfaces to attack ships. Perhaps a giant squid corpse washed on shore, and captured people’s fear and imagination. 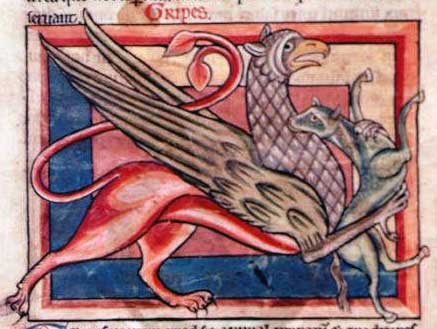 A lot of mythical creatures are hybrids. The griffin has the body, back legs, and tail of a lion, and the head, wings, and talons of an eagle. Herodotus described the animal as living in a land filled with gold, and that “one-eyed men” would steal it from the griffins, whose instinct was to protect treasure. Greeks frequently used the griffin in their art. Similar animals appear in Egyptian, Persian, and Cretan art. Because the lion was considered “king of beasts” and the eagle was “king of birds,” the griffin was adopted as a symbol of royalty and courage. Medieval art is rich with griffins.

Familiar to fans of Harry Potter, the phoenix story originates in Arabia and Egypt. While writing about Egypt, Herodotus included the phoenix in a list of animals that included the hippo and crocodile. The bird supposedly flew from Arabia to Egypt when it had aged 500 years. In Heliopolis, the City of the Sun, the bird would build a special nest of spices that would erupt into flame under the sun’s heat. The bird would allow itself to be burned, only to be reborn nine days later as a younger phoenix. Christianity adopted the phoenix as a metaphor for Jesus’ resurrection. It’s possible that the original phoenix was actually an extinct Asian ostrich, since the oldest stories about a phoenix-like bird are from China. It could also be an ancient flamingo from Egypt, who would lay eggs in hot salt flats. The steam might have resembled smoke from a fire, and eyewitnesses crafted their own explanation.

When Healthy Foods Turn on Us

What to Consider when Shopping for a New Home