Home » Our World » NASCAR Bans the Display of the Confederate Flag

There has been so much news in such a fast-moving world it is easy to miss what may be a significant change in position and stance by an important body in this country. National Association for Stock Car Auto Racing (NASCAR) has banned the display of the Confederate flag at all race tracks and properties, effective immediately.

The rebel battle flag is already banned from display in official NASCAR capacities but is stubbornly prevalent at most tracks. NASCAR already took a stance against racism at Atlanta Motor Speedway, when the body held a minute of silence for racial equality. NASCAR official (and U.S. Army veteran) Kirk Price dropped to a knee during pre-race ceremonies.

“The presence of the Confederate flag at NASCAR events runs contrary to our commitment to providing a welcoming and inclusive environment for all fans, our competitors and our industry. Bringing people together around a love for racing and the community that it creates is what makes our fans and sport special. The display of the confederate flag will be prohibited from all NASCAR events and properties.”

Reactions from the drivers

The drivers’ reactions are about as diverse as you will find. Bubba Wallace, NASCAR’s only black driver, asked again this week for the banishment of the rebel flag. By making his voice heard, Wallace brought additional attention to a subject that is gaining national traction. Wallace came in 11th at Martinsville driving a car with a “Black Lives Matter” paint scheme, pictured below. 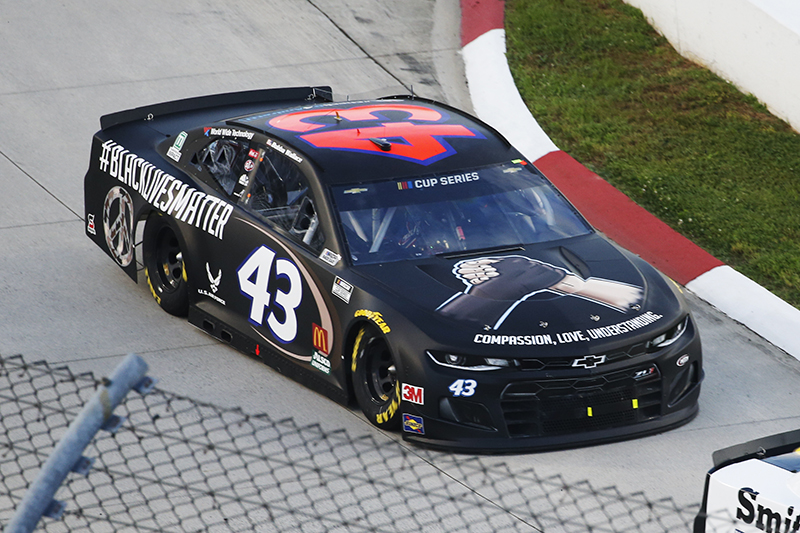 The #43 Bubba Wallace car the week that NASCAR banned the Confederate flag from race venues.

“Bravo. Props to NASCAR and everybody involved. This has been a stressful couple weeks,” Wallace said. “This is no doubt the biggest race of my career tonight. And it couldn’t be at a more perfect place. Where I got my first win in the Truck Series in 2013. Followed it up with that second win in 2014, so I’m excited about tonight. There’s a lot of emotions on the race track and off the race track that are riding with us, but tonight is something special. Today’s been special. Again, hats off to NASCAR.”

Ray Ciccarelli, a part-time driver in the truck series was quick to respond to NASCAR’s move.

“I don’t believe in kneeling during the Anthem nor taking people’s right to fly whatever flag they love,” he wrote. “I could care less about the Confederate Flag, but there are people that do and it doesn’t make them a racist all you are doing is (expletive) one group to cater to another and I ain’t spend the money we are to participate in any political BS!! So everything is for SALE!!”

Winds of change can move mountains, and one mountain these winds have moved is NASCAR. It is a courageous step on the part of the racing circuit to ban the Confederate flag and one that will resonate with other organizations facing the same pressures of wind and change.

All You Need to Know about Car Auctions: Facts and Figures