‘New California’ Another Star on the U.S. Flag?

Home » Our World » ‘New California’ Another Star on the U.S. Flag?

The American flag contains 13 stripes, one each for the thirteen original Colonies. It contains 50 stars, one for each state in the Union. That’s the way it has been since Hawaii became 5-0, and that’s the way it will always be. Or will it? There is a movement among some dissatisfied Californians to form the 51st state. It isn’t the first time such a thing has been pondered, but this time the movement may have some legs. Gildshire examined the “why’s” and prospects for New California, so we could answer the questions that we are being asked. This is the result of our research.

Is “New California” a brand new idea? I’ve never heard of it. Actually, it isn’t new. There has long been a pull and tug between rural California and the urban population centers.

This pull and tug you mention. Is it unique to California? No, it isn’t. We see the urban/rural divide elsewhere. Upstate New Yorkers believe NYC dominates the decision-making process in The Empire State. Downstate Illinois chafes under the influence of Chicago. Out west, eastern Oregon and Washington feel more in line with Idaho than they do the western half of their own states.

Why is that? It has to do with politics, at least in large part. The population centers tend to be more progressive, while rural enclaves skew conservative. It does little good for Quincy, Illinois to reliably vote GOP (and they do), because the large number of votes in Chicago keeps Illinois a Democratic stronghold.

So are politics the reason for New California? Yes, for the most part. The founders cite high taxes and an “anti-business climate.” Both are buzz terminology for conservativism.

Who is behind the movement? Tom Reed is the self-styled Thomas Jefferson of the New California movement, but the group is organized with committees and a council of county representatives. 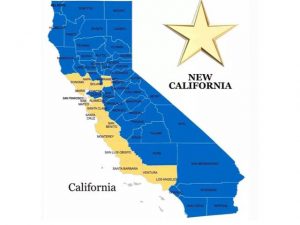 So, what would New California look like? Is it just a north-south split? No, it’s a little more convoluted than that. Look at the current map of California. Work your way north from San Francisco, straight up 101. New California would kick in at the Sonoma/Mendocino line and go to the border with Oregon. Now work your way east and south, taking in everything until you get to Sacramento. Go around Sacramento and take in everything from the western edge of the Central Valley to the Nevada and Idaho borders. At the southern end of California as we currently know it, take everything from Orange County south. There’s your new state. It would be the 16th-largest by land area, in the country.

Wait! California loses San Diego? Does San Diego know this? They do now! Gildshire’s corporate offices are in San Diego!

This all sounds crazy train! Is there any chance of it coming to pass? We have learned, over the past year or so, to never say never. As we said, this isn’t the first time such an idea has floated across the news feed. However, there are some differences this time around.

How is this movement different? First of all, most other split the sheets of California plans included slicing off dissatisfied pieces of southern Oregon and adding them to a new state, called “Jefferson.” Variations on this plan have shown up periodically. New California wouldn’t have to take on two state governments at once. Secondly, New California organizers intend to form their new state as West Virginia was formed. Namely, through open chartering, rather than as a hostile takeover. New Californians aren’t looking for a fight (though they know they will get one.) They just want lower taxes and a chance to put GOP legislators in office, both state-wide and nationally.

Is there a chance that “old” California will say, “Go ahead?” No chance at all. The Central Valley is the breadbasket of America and an important part of the revenue stream of the state. Also, the population loss means fewer members in the House of Representatives and far less influence nationally. Trust us, Gov. Brown has people already at work ready to quash this idea, if and when it gains traction.

Sooooo, we should pay attention to this, or it’s someone’s pipe dream? For now, keep an eye on it as an interesting anomaly, but don’t throw out the 50-star flag. Gildshire will let you know if this thing gains momentum. Our guess? It will die a-borning. However, we have been wrong before. Crazier things have happened.

More Obese People in the World than Underweight