Here at Gildshire worldwide headquarters, electric cars are on our radar. The industry is moving that direction and consumers are warming to the idea of lives with less in the way of harmful emissions into the atmosphere. While we may be ahead of the curve in some ways, we aren’t that far out of the mainstream. How do we know? Because a man who made his fortune in vacuum cleaners is building an electric car for mass production. Sir James Dyson just revealed the specs for the Dyson electric car and the drawings are creating a buzz in the industry.

Sir James’ renderings show an aluminum body that looks fit and finished. It is a long, sleek crossover occupying approximately the same space as a Range Rover. The comparisons to the classic British 4×4 end there, though.

Details of the multi-billionaire inventor’s thoughts on the matter dramatically emerged from his three patent applications that were made public this week. They concern the ultra-long wheelbase, large, thin wheels, crossover body, raked windscreen, and short overhangs.

The low-roof versus high-floor layout is made feasible because the long and thin battery will be under the floor, running the length of the car. Dyson claims the proposed configuration will offer the driver a commanding driving position.

Two small (rather than one large) motors allow the cab-forward setup. Dyson’s patents propose seven-seats. The center and rear passenger seats mount higher than the front seats for optimal visibility.

A saving of 3.5 inches of width is possible, according to Dyson, for two reasons. First, the lack of a weighty internal combustion engine, but also narrow tires on large-diameter wheels need smaller wheel envelopes into the body. Dyson wants to keep the car’s grille area to a minimum because that is a major aerodynamic factor in the automotive equation. 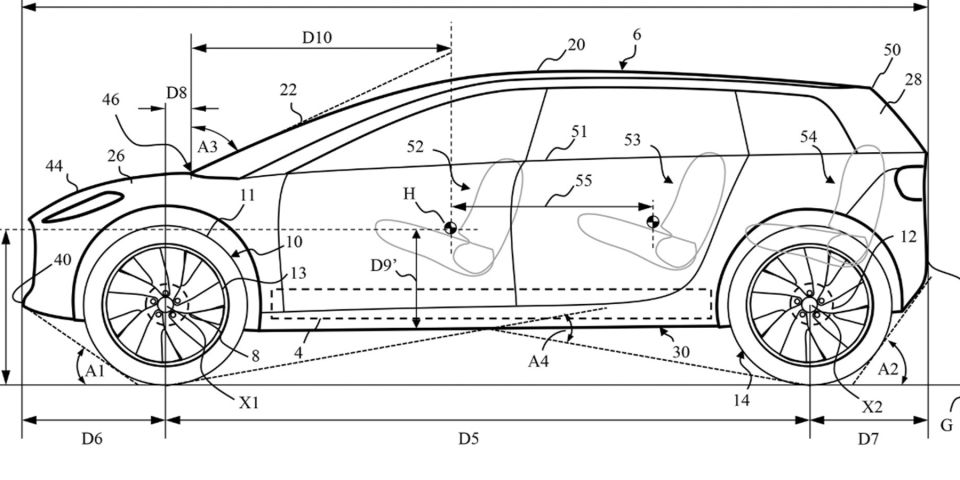 Drawings and renderings of the Dyson electric car reveal a revolutionary concept.

Dyson confirmed that his car will have an aluminum frame since steel is too heavy for his purposes. The battery patents suggest it will be mounted beneath the body, and encased in a rigid structure. The Dyson people call this a “skateboard” platform chassis. The suspension will be both height adjustable and self-leveling, according to Dyson, who pointed out the pitch-limiting advantages of a very long wheelbase.

The Dyson car sports 23 or 24-inch alloy wheels, spinning thin tires with a 45-55 profile. Dyson told the press that his experiments reveal that these wheels offer much lower rolling resistance than conventional smaller, wider wheels. He says that the regenerative braking capabilities of this tire-wheel combination should be unprecedented.

This unusual wheel/tire combination creates the aerodynamic drag reduction that Dyson is seeking, allowing lower tire pressure. This configuration will add to the riding comfort for passengers. They will also resist hydroplaning on wet roads. The tire can still have a relatively large footprint because of it’s longitudinal, rather than lateral construction.

Dyson’s patent applications were light on revelations about his powertrain plans, at least beyond theory. His filings indicated that the car could be gas-hybrid, hydrogen or battery powered. He confirmed that his company is looking into two types of solid-state battery. Internal memos suggest that these will be the next generation to follow the lithium-ion batteries that power today’s electric vehicles.

The electric car movement is the most exciting thing happening in the car world, and inventors like Dyson only whet our appetite for more. His car is aimed toward the high-end of the buying public, but prices drop as demand grows. Gildshire will share more about Dyson electric car info as we receive it, but the early news is intriguing indeed.

The Rarest Books in the World