For years, people believed that fat was the source behind a host of health problems, but science has shown that only certain kinds of fat are bad. This has resulted in a resurgence of real butter and fats in cooking. One of the most underrated fats is rendered duck fat, which is known for its silkiness, high smoke point, and unique savory flavor. It can also be reused, while olive oil and butter cannot.

France has been using duck fat for decades, but the United States didn’t catch on until they started envying the French physique. How could the French diet be so full of awesome food like butter and red wine, and everyone stays in good shape? There are lots of reasons why this might be, and one of them might be the use of duck fat. 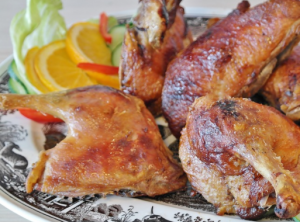 Fat drips off cooked duck and is jarred

Chefs and foodies love duck fat because of its flavor, but they also point to its health qualities. Duck fat is not only “clean” and made from just one ingredient, it is low in saturated fat and high in unsaturated. It’s one of the healthiest animal fats you can choose to cook food with.

Monounsaturated fat is emphasized, but it’s important to know the details before declaring duck fat a “health” food. Monounsaturated fat is the dominant fat in food like eggs, olive oil, avocados, and almonds. However, if you read the labels, monounsaturated is also the most prevalent fat in certain granola bars and even chicken nuggets. There’s clearly more to the story than just levels of one fat.

Take a closer look, and you’ll see that the healthy fat in question is a specific monounsaturated fat called oleic acid. It has been linked to the Mediterranean diet, and may be the reason that particular eating lifestyle is considered one of the healthiest in the world. Duck fat has 40% oleic acid, which is pretty good, but olive oil has 71%. That’s way better. Duck fat is also 33% saturated fat, while olive oil is around 14%. Olive oil is clearly much healthier than duck fat, which in turn is healthier than butter, which is 51% saturated fat and has much less oleic acid.

All in all, duck fat is better for you than butter, but doesn’t compare to olive oil. However, that just makes the fat a “special” fat that you can eat in moderation. In terms of using it at home, duck fat is pretty pricey anywhere, so that definitely makes it more of a treat than an everyday thing. Since you want the fat to last as long as possible, it’s best to store it in the freezer and use small bits at a time. 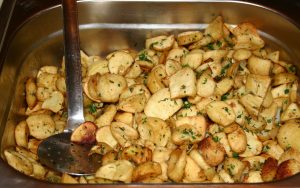 So, what can you use duck fat for? It’s especially good on vegetables and potatoes. Lots of restaurants that use it will use it for deep-frying their fries. Foodies say the fat brings out flavor from vegetables that weren’t there with other cooking fats and oils. The fat also gives poultry a really crispy skin during a sear, and because it can easily go from a solid to liquid state, it can be used like a pat of butter or drizzled like oil. For a special movie night, use it instead of butter on popcorn! It’s also being used for sweets like cookies and caramels. To buy duck fat online, D’artagnan is considered one of the best shops.

For more on healthy fats, check out these Gildshire articles on grass-fed butter and the healthiest cooking oils.